If you are interested in collecting Cameos or just want to add a nice Cameo to your collection, beware! The Cameo has been popular since the 16th century. So has the Cameo imitation. With the modern processes and equipment of today, it is becoming more difficult to spot knock-offs every day. This along with the Costume Jewelry trade flooding the market with imitations, you need to be aware of what to look for.

The imitation Cameo market exploded with the invention of plastics. 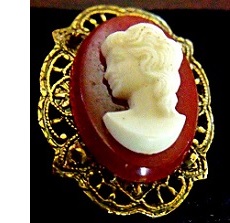 Mass produced, and marketed by fashion jewelers, these Cameos were all the rage. These inexpensive and realistic imitations were readily available from costume jewelry makers such as Coro, Trifari, and Monet.

Dead Give Away’s a Vintage Shell Cameo is Fake

There are some dead give away’s to these imitations though. An authentic Shell Cameo will have a curved back. If the back of the Cameo you’re considering is flat, or covered. Most likely you’re looking at an imitation. Still, there are other tell-tell signs as well. A genuine Shell Cameo will have a matted surface. While the plastic imitation will be much shinier. Notice the Vendome imitation above. Then compare it to the vintage shell Cameo below. 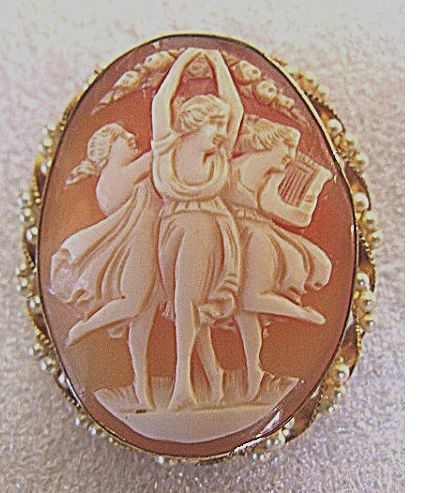 Do you see the difference? The Vendome Cameo is far more glossy, with harder lines as well. Another thing to remember, Sea Shells are translucent. Light passes through a.genuine Shell Cameo. In fact, you should be able to see the outline of the carving from the back when held up to light.

This is also a good way to check a Cameo for stress cracks. Any previous damage to the Cameo will show as light passes through it. While a crack does not mean the Cameo isn’t authentic it will decrease the value.

After checking the Cameo with the above methods the next step is to use some magnification. With either a jewelers glass or a magnifying glass look closely at the surface.A genuine Shell Cameo should show fine tool marks. Whereas a plastic imitation will appear smooth.

Finally, the hot needle test is something you may not be able to perform.No salesperson wants will you use a hot object on their product. Even if it is a carved shell. But heating needle over a flame then touching the piece will tell you real quick if it is plastic.

Ways to determine a Cameo’s Age

Once you are satisfied that your vintage shell Cameo is authentic. Determining its age will help pin down the value. First, let’s talk about some general clues. Looking at a vintage shell Cameo the subject generally faces right. While modern pieces face either left or forward. You can see this in the two pictures above. Another set of clues is the shape of the nose, The hairstyle, and the manner of clothing.

I have grouped these clues together and labeled them general clues simply because they can prove a Cameo is modern but they can not prove it antique. No carving before the 20th century will have a cute button nose  Also Victorian Ladies didn’t wear pony-tails, nor did they wear short hair. To be blunt, vintage shell Cameos will not have modern looking subjects. However, it is possible that a modern Artist could recreate an older Cameo.

Dating a Cameo by its Closure and Mount 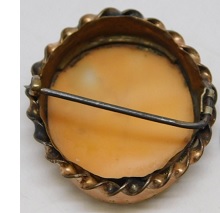 The Closures and mounds are by far more accurate way of judging age. Handmade pins and closures such as in this Picture were most likely made in the 1800’s. Also, notice the mount. An antique Cameo will never have just four small prongs securing it.

In reality, brooches will offer the most clues. The earliest closures were simple C-catches. Found on brooches from the early 1800’s until roughly 1890. The picture to the left is an example of a C-catch. 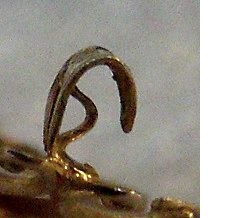 As with anything hand-made each Jewelry Maker had his own variances. Another clue for brooches from this era is the size or the pin itself. Clothing during the Victorian age loosely woven. Due to this pins were much larger during the period and often extended as much as a 1/4″ passed the catch.

The pins hinge used was also slightly unique to the period. These types of hinge is referred to as a Tube Hinge. I say slightly because the tube hinge did briefly cross over into the time period when the first hand-made safety catches were being invented around 1910. 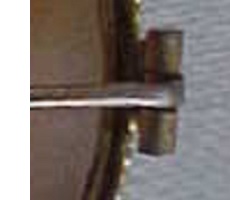 As the 19th century began to come to a close, Jewelers started experimenting with latches to secure their brooches better. Inventing several styles of safety catches. Each Master Jeweler designing his own variance.

As early as 1850 hand-made Safety Catches such as the Push-Pull catch  / Trombone catch below began to appear, Originally patented in Britain the catch didn’t gain popularity outside of British designers until 1890. 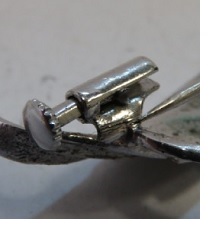 Between 1890 and 1930 several Handmade latches were created. These new styles of catches became popular with customers since they added security from loss. But the designs were tedious work. Which would eventually lead to the modern machine-made safety catch.

Handmade design examples are shown below.

With the turn of the 20th Century, many changes were happening.Clothing was giving way to closer wove fabrics and machine-made findings were increasingly making the Jewelers life much simpler.

Clothing of the Victorian age had been made from loosely woven Cotton, Linen, or Wool. Then as the Roaring 20’s ushered in Clothing became much more delicate. Sheer cotton blends were being produced to resemble silk. While other fabrics used were Silk, Wool, and Rayon. As such the thick sturdy pins used during the Victorian age were no longer acceptable.

Basically speaking 3 clues will tell you that you’re looking at a modern Cameo. The rollover safety catch. Since the 1930’s most Jewelers used the machine-made catch to the right. 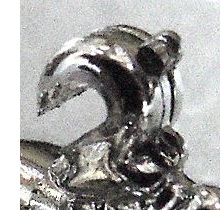 If you see this roll over catch on a Cameo, or on any brooch for that matter, you know it is a modern Pin or it has been repaired. Either way, it is of less value than an original Antique Cameo. 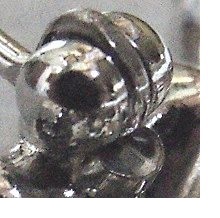 Then there is the hinge. Around 1930 Jewelers switched to a machine-made hinge as well, moving away from the tube hinge. These advances make the Jewelers life much simpler.

Finally, there was the pin itself. Pins used during the 1800’s were thick and sturdy. Resembling miniature square stakes at times. During the 20th century, this changed. The smaller, more slender the Pin is, the more modern the Cameo. Remembering an older Cameo could be repaired.

Placing a Value on Your Cameo

Ultimately anything you want to sell is only worth what you can get someone to pay for it. That said there are some guidelines you should know. A hard rock Cameo (agate or lava) is more valuable than a vintage shell Cameo. Also since most Cameo subjects are ladies, if you find a Cameo depicting a man it will be more valuable and one with an Afro-American depicted even more so.

Price ranges for Antique Shell Cameos can run anywhere from $30.00 up to $800.00 according to factors listed before. A confirmed Antique with no cracks or chips, mounted in gold with a pretty setting, and carved with nice flowing lines will be on the upper end. While any deviations or damage will reduce the value. For example, a crack in the Cameo from the back while holding it to light will reduce the value. Whereas a crack you can see from the front with your naked eye is worthless.

So Look around, search google and compare your vintage shell Cameo to those you find, but stay away from auction sites. Prices can be greatly undervalued and quality can be questionable as well. Instead look for dealers who specialize in Cameos to get a true feeling for their value.

5 thoughts on “How to Start Collecting Valuable Vintage Shell Cameos”