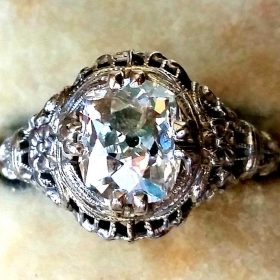 When buying an engagement ring you have many decisions to make. The cut of the diamond, yellow gold or white, or maybe platinum. Then there is the question of do you buy a new ring or look for an antique engagement ring?

First of all let me ask you. Are you looking for something truly unique? Something special, that stands out and says I’m not just any ring? Then maybe you are looking for an antique engagement ring. But there are things you need to know and still a lot of decisions.

One thing you need to understand is that the classification for an antique engagement ring is very different from other antiques. While most antiques require a threshold of 100 years, a ring is an antique after 50.

Still, most Jewelers use the term vintage. If you hear the word “Estate” it means the ring is less than 50 years old. An estate ring could be as little as 1-year-old.

Another thing to think about is that major retailers of new jewelry have a 100% markup. Basically, when buying new jewelry you will be waiting approximately 30 years before the true value reaches the amount you paid. Aspects of a Modern Diamond

The modern diamond will appear to be more brilliant. While bringing out the color was more important in antique stones 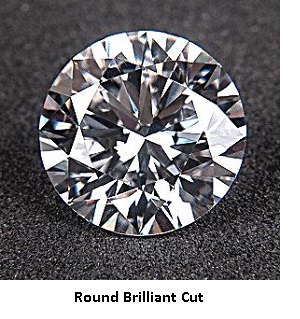 The modern round brilliant cut diamond is the most popular diamond sold today with around 75% of the market. Designed to reflect light back out of the diamond. This cut shows off the diamond fire and brightness.

Achieving this with 57 to 58 facets. While the number of facets is the same in other cuts. The round brilliant uses a larger table cut with longer and leaner facets as well as a decreased cutlet size..

A number of things have led to the creation of the round brilliant cut. First and foremost was the diamond discovery in South Africa during the 1860’s. This discovery propelled South Africa into the largest supplier of quality diamonds in the world.

Advancements in equipment, techniques, plus the increased supply led to what some experts believe to be a perfect diamond.

What to Expect with an Antique Engagement Ring

Antique diamond cutters worked with the gem to get the best color. While a modern diamond reflects light back out causing a sparkle or fire. The antique diamond draws you into the matrix, capturing the light to give off a warm glow. 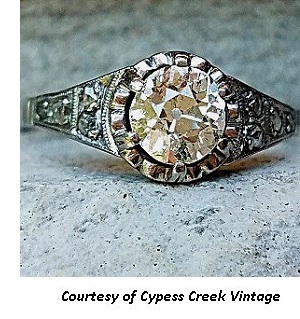 The European cut is actually similar to the round brilliant, also made with 58 facets. But there are several differences which change the play of light. First, the Table Cut on the European isn’t as wide, and the crown is taller. Also, the facets of the pavilion are shorter and wider.

Yet the most notable difference is the larger Cutlet. When looking into an Old European you will notice the small seemingly round circle near the center of the gem.

Developed in the 1890’s the Old European was the first truly round diamond. With the invention of a steam-powered lathe, the bruting process became more precise. Enabling Master Cutters to transform the Old Mine Cuts into a round European Cut.

While the European cut did improve on the old Mine Cut, diamonds were still mostly hand cut. Giving each Gem its own personality with slight imperfections in symmetry from facet to facet. An excellent choice for an antique engagement ring.

The one drawback to this new style was that up to 50% of the crystal was cut away. A waste that conventual cutters would never have tried if not for the South African discovery.

The Old Mine Cut 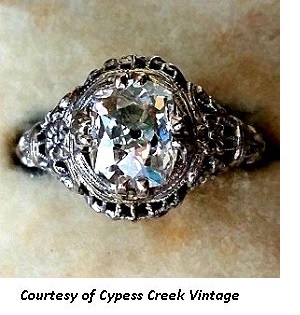 First developed in the early 1700’s, and completely hand worked. The Old Mine also has 58 facets. Including a prominent cutlet facet.

During this era, diamonds were very rare. As such it was essential to preserve carat weight while bringing out the best color in a gem. This produced a diamond with a square shape and rounded corners. Slightly similar to the cushion cut of today.

In reality, similarities end with the outline shape. The crown of an Old mine is taller with larger facets. This captures light differently, reflecting wider patches of color inside the diamond.

It is this contrasting light and dark movement inside an Old Mine cut which has made it the most appealing stone to antique lovers. An Old Mine antique engagement ring is unique and filled with old world romance. 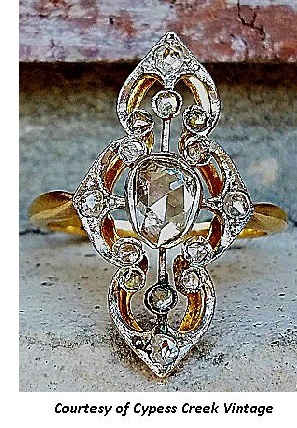 Developed in the early 1500’s and one of the first known diamond cuts. The Rose features a faceted crown and flat back.The cut which changed European perception of the diamond.

Thought to have been created in India. The Rose Cut market exploded with the discovery of Brazilian diamonds in 1725. Cut with facets of either 3, 6, 12, 18, or 24, It was the rough stone itself that determined the shape of a Rose.

During the Georgian era, the Rose became increasingly popular for evening wear jewelry. Nothing sparkled better than a Rose Cut diamond under candlelight. Which was the driving force of the stones popularity amongst the wealthy. Even after the introduction of the Old Mine cut, many prefered the Rose.

Over the years the Rose Cut has had fluctuating periods of demand but has never faded away. A revival of the cut began in the mid 19th century which lasted into the early 1900’s. Then again as late as the 21 century, reported by Modern Jeweler

A statement in simplicity with a history of 500 years. The Rose Cut antique engagement ring with its antique style will shine with a delicate glow.

Thank you for taking the time to read the information I have on antique diamonds. There are many other decisions to make when choosing your antique engagement ring. Which alloy to select, which era fits your style, and do you want contrasting gems. Far too many questions to cover in one article. So please check back later for more of my posts.