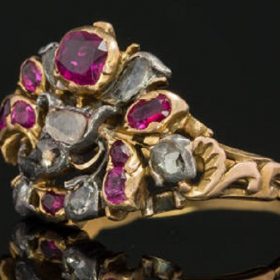 In my last post on the Antique Engagement Ring, I discussed the 3 major diamond cuts found in the Old World Ring. Yet while the diamond may be the first thing noticed, there are still many other features which make an Antique Ring unique. The form of the ring, the metals used, and the presence of other gems come together into something truly special.

Before the discovery of South Africa Diamonds, these gems were very scarce. Therefore most rings of the period were made with an array of precious stones. Other discoveries also had effects in designs. Even subtle changes in lifestyles created dramatic differences through the years.

During these periods of time, Royalty marked the trends others would follow. As such, differences in style of the Old World Ring often changed with the Crown. 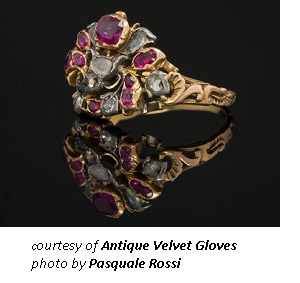 The Georgian Period span 116 years from 1714 until 1830. During the reigns of George the first through the fourth. It was a time of growth and improvement in life.

The expansion of the middle class during this time brought new wealth. Which in turn created more demand for the crafted engagement ring.

With the increased literacy of the time, a fascination with nature and faraway lands grew. Georgian Jewelry reflected this fascination, as did the engagement ring. Romantic motifs of butterflies and flowers were a common theme during this era.

A right of passage among the young Georgian elite was the Grand Tour of Europe. With time spent in the cultural centers of Rome, Venice, Florence, and Naples. These experiences had a great effect on the styles of the times. Grecian designs influenced many aspects of the Georgian life.including the Engagement Ring. intricate gold works of acorns, doves, scrolls, and wheat often decorate the Georgian ring.

Typically the hand-made Georgian Ring is 22k or 18k yellow gold and silver. The stones sit in silver to secure them. While rings of 15k and 10k gold are rare due to being illegal to sell on the open market by the gold standard. These antique rings will have a mismatched bouquet of stones. Shaping stones during this age were difficult if not impossible. Shaping the metal instead to fit the gems.

The Georgian Old World Ring is becoming increasingly rare. Well over 200 years old these rings, when found, are family heirlooms which have been passed down for generations. Handcrafted to reflect the romanticism of the 18th century. The intricate details and unmatched jewels combining into a beautifully styled ring. 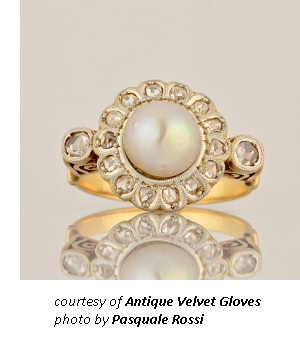 As Queen Victoria ascended to the throne in 1837, the industrial revolution is in full swing. Steam presses replace the hammer in the production Gold alloys. While Roll Machines easily form metals into shape.

The use of Platinum in jewelry is now possible for the first time. As these advances introduce a new style of gold. Rose Gold, a mixture of gold and copper, becomes vogue during the Victorian age. As the Georgian love for yellow gold begins to fade.

The Victorian Age actually consists of three sub-periods. Taking the crown at the age of 18, the young Queen Victoria was beautiful and very fond of jewelry. During the early years of her reign, engagement rings, as well as other jewelry, were extravagant and colorful. Rings of the era continued to use motifs similar to the Georgian era, but also included Celtic designs. With the popular theme of using the Brides birthstone as the rings focal.

When the young Queen married Prince Albert in 1840, a snake motif ring encrusted with the Queen’s birthstone was given as the engagement ring. The symbol of eternal love, two snakes entwined to form the ring accented with emeralds.

This style of ring became immensely popular as anything the Queen wore soon became all the rage.

There were two events around this time which changed the jewelry industry. First was the gold strike of 1849 in America.

Then in 1854, the gold standard was changed, allowing lower karat alloys. Making it legal to sell 15k, 12k, and 9k on the open market. Two changes which increased the supply of gold and strengthened the rings of the time.

The Years of Mourning

When Queen Victoria’s beloved Albert passed away in 1861 the Victorian Age moved into its second period. Victoria never fully recovered from her loss and the jewelry of the time took a darker path. After Albert’s passing the engagement ring became less ornate, and the use of white and black enamel began to appear.

Just prior to the late period of Queen Victoria’s reign, the South African discovery of diamonds occurred. When the diamond fields were discovered in 1867 the supply of diamonds rose tremendously. The lower cost and invention of the Old Mine Cut both helped to increase the diamonds popularity.

It was also during these late years that the handcrafted Old World ring gave way to the mass-produced machine-made ring. Platinum settings had completely replaced the gold and silver settings, and age-old metal techniques disappeared. 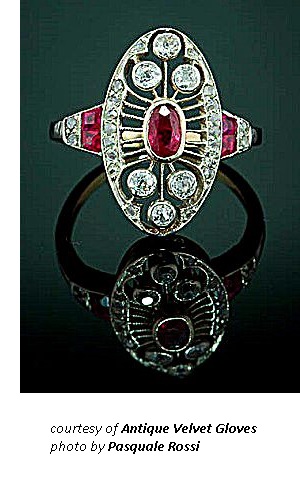 As the throne is passed to King Edward VII society is at its height and grandeur. Innovation and creativity are fueling advancements in every trade. Filling the world with hopes and dreams.

Reflecting the mood, jewelry once again became bright and colorful.  The invention of a steam-powered lathe rounds the diamond for the first time. Allowing cutters to create the first Brilliant European Cut.

Also with the perfection of the Oxy-Acetylene torch, Platinum could now be used to create the whole ring. Artistic filigree designs giving the appearance of jewels set into lace were now possible. Due to the strong Platinum metal and strengthened 14 Karat gold.

During this age, Platinum was by far the metal of choice. but yellow and rose gold were also fairly popular. Yet Platinum was very rare and expensive. As an alternative, Goldsmiths of the day began experimenting with an alloy of gold and nickel to produce a white gold.

Another style prominent during the Edwardian Period is the Cluster Ring. With a diamond or colorful jewel in its center, surrounded by a floral array of colorful stones or pearls.

Many rings made during this period are misclassified as Edwardian. When in truth, they are actually part of the Art Nouveau movement which I will discuss next. 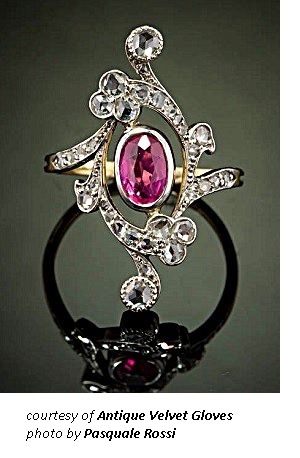 The Art Nouveau Movement or New Art as it translates spans a time from the very late Victorian age into the Edwardian period. As the industrial revolution took hold in Europe, the creative arts community rebelled. As Old world craftsmanship was replaced by machinery, the Art Nouveau movement began as a creative protest.

Defined by circular lines and feminine designs, these rings are a return to the theme of nature. While the movement was started by craftsmen wishing to secure the art of handcrafted jewelry. Sadly even Art Nouveau pieces were eventually mass-produced.

Pearls and brightly colored jewels were the centers of attraction in the Art Nouveau ring. With small diamonds added as accents to give the ring its flash.

Platinum was a prominent metal used in the movement, followed closely by yellow gold until the later parts of the movement when white gold became available.

Today the Art Nouveau engagement ring is highly sought after and prized for their beauty and unique style. Many being the sole survivors of the lost art of handcrafted jewelry.

Each of these Old World styles has their own personalities. Beauties to behold and sure to be treasured for a lifetime. When searching for an Antique Engagement Ring the first step is to set a budget and stick to it. Allowing only a 20% leeway if you find something you just can’t live without. The second step is to find a reputable dealer.

I have tried to address the differences between Old World periods and things to look for, but… Ask questions, then ask some more. Be sure you are getting what you are paying for!

Thank you for taking the time to read my article and I hope it helps you to pick out a special ring for the person in your life.