As one of the fastest growing sectors in the collectible markets today, the Costume Jewelry Collection is no longer just a fad. While many people have looked at costume jewelry as junk. In truth, the early costume jewelers craftsmanship rivaled those who made fine jewelry in the same era. A proven fact as early 20th-century costume jewelry reaches antique status still in near perfect condition.

The term, “Costume Jewelry” originated in the early 20th century. First used in the entertainment industry, yet the production of jewelry with imitation gems dates much farther back.European Royalty and Aristocrats often commissioned jewelry made with Paste through the years.

Costume jewelry designers had very high standards for construction prior to the 1950’s. Many pieces receiving multiple layers of gold fill, rather than gold plating. Also during this age, designers preferred to use quality Czech glass over less expensive stones.

Yet the true turning point of public perception about costume jewelry began in 1953. It was the year Eisenhower took office as President of the United States. Mamie Eisenhower also decided to buck tradition by wearing Trifari to the inaugural ball that year.

Deciding How You Are Going To Start a Costume Jewelry Collection

First and foremost your collection should be pieces you love. Even with that said though, it pays to have a plan. To go out and just start buying pieces of vintage jewelry without doing any research or having some type of plan is a sure way to pay too much. Or worst invest in knockoffs.

Basically, there are four types of collections.

While the haphazard collection may not be impressive to other collectors, it should be to the person who matters the most, yourself. This type of collection should be the types of jewelry that speaks to you. The things you love.

A collection of this type is definitely the easiest to build. As your personal taste will set the cost of collecting. Collecting this way won’t require massive research. Yet, you do need to be aware of how to spot fakes. Some authentic vintage pieces can bring hefty prices. Causing forgeries of designers such as Weiss and Eisenberg to flood the market. Rebecca Fransway has a great page dedicated to spotting Fake Weiss Jewelry.

A Costume Jewelry Collection by the Era or Style

Choosing to build a costume jewelry collection by a certain era will require a bit more research. Yet this type of collection can be magnificent. While the cost to build such a collection will vary with the era you follow and the designers you choose.

Costume Jewelry Collection from the 1920’s

The golden age of costume jewelry began around the 1920’s. Influenced by both Art Deco and the Egyptian Revival. On one hand, the discovery of Tutankhamen’s tomb in 1922 added fire to an Egyptian craze which had its beginnings in Hollywood 5 years earlier. While on the other there was the Roaring 20’s with Art Deco designs, Long beaded flapper necklaces, tassels, and Bakelite bracelets stacked on women’s arms.

These two competing styles continued until 1929 with the start of the Great Depression. As the economy suffered, the fashion industry struggled to find less expensive supplies to meet the demand for cheaper jewelry. Still, the Art Deco movement continued into the early 40’s.

Costume Jewelry Collection from the 1930’s

Moving into the 1930’s as the world economy plummeted, as Jewelry designers rushed to find materials which they could use to make affordable jewelry.

During this time when budgets were stretched incredibly thin, fashions became very bland. In turn, this increased the demand for sparkling jewelry to dress up the plain clothing.

This along with the Hollywood effect jewelry became very extravagant. Sparkling clear rhinestones imitated diamonds as the light played off of them on the silver screen.

In the early 30’s color hadn’t reached the cinema and clear rhinestones set into silver tones flashed across the screen. In turn, Jewelers mass-produced the jewelry shown in movies to meet the demand for glitz.

Many dress designers such as Eisenberg also began to produce costume jewelry.during this time. Experimenting with new styles. By the end of the 1930’s color exploded into the costume jewelry industry and gold tones had made a comeback. Something that had been missing from fashion since the late 1800’s.

Costume Jewelry Collection from the 1940’s

As World War II raged across Europe, American Jewelers source for quality rhinestones dried up. While the use of metals was restricted. As needed for the war effort. Sterling Silver was used by high-end costume jewelry companies during this period. While Vermeil coated with a thin layer of gold also became popular. 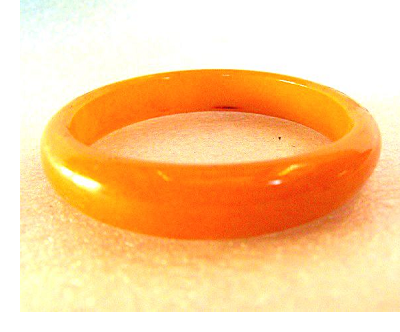 Plastics such as Bakelite and Catalin also became popular during this era. With the traditional supplies, restricted Jewelers turned to new and inventive ways to create fashionable jewelry  Mixing wood, plastics, and shells together to form interesting pieces.

Needless to say Patriotic colors of Red, White, and Blue were popular themes during the early 1940’s.

Another popular collectible from this era is Jelly Belly jewelry. A pet nickname given to figural jewelry made with clear plastic cabochon bellies made popular by companies such as Coro and Trifari.

An interesting fact about the vintage Jelly Belly is that the Lucile plastic used to create these wonderful pieces was actually World War II Airplane windshields which didn’t pass inspection.

Costume Jewelry Collection from the 1950’s

The 1950’s began with the Korean War, just five years earlier World War II had ended, with the restrictions and shortages of the 40’s rescinded. Then in 1953 with the signing of the Korean armistice, the US entered a time of peace and prosperity it hadn’t known since the early 20’s. Mid-century jewelry took on a sense of refinement and embodied the use of color, 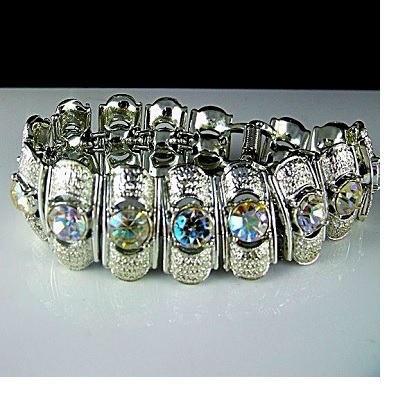 Both Austrian and Czech glass was readily available again, while rhinestone producers such as Swarovski experimented with new shades and styles.

Around 1955 Swarovski introduced the Aurora Borealis rhinestone. An amazing new stone which emitted dazzling colors from a clear rhinestone.

Also around this time, the Pearl necklace had a huge rise in popularity. Faux pearls made from the same acrylics developed for war..Produced In various shades to complement women’s complexion and outfits

Coordinating Jewelry and fashions during the 50’s was extremely important. A lady presented herself with a considered and put together look. The costume jewelry answered this desire by producing parure sets. Matching sets of earrings, necklace, and bracelet in textured gold tones were all the rage.

By the end of the 1950’s pierced ears slowly began to become socially acceptable again. Clip on and screw back earrings had ruled the industry for more than 30 years, but these limited the earring as a fashion statement. As the pierced earring became more popular so did the lengths of dangles.

The 60’s and 70’s were decades of change. The Baby Boomer’s were coming of age and the counter-culture movement had begun. Plastics became the preferred material with colors and patterns which clashed on purpose. Everything was big and bold often labeled as “Mod”. 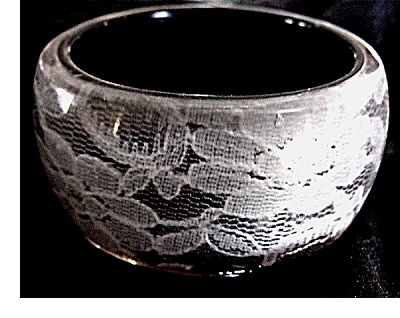 Black and white Op Art jewelry molded into low-cost plastics emerged as well as geometric shapes resembling the Art Deco patterns of the 1920’s. Also prevalent was the use of oversized flower designs to fit into the Flower Power generation.

As the 60’s flowed into the 70’s many trends followed one decade to the next. While others slowly faded away.

During the early 1970’s plastics were still quite popular. Although the mod psychedelic colors began to fade into darker earth tones. This was an age of large beads  Long strands of large beaded necklaces were very popular in the early 70’s.

Ultimately it was the oil shortages of the decade which helped shift the trend of plastics back to metals, Yellow gold tones were increasingly popular through the end of the 70’s and the Boho look of southwestern Sterling and Turquoise was king.

This post has given a brief look into starting a Costume Jewelry Collection either by a haphazard style or collecting by the era. It is by no means an in-depth review but rather a starting point for your personal research.

In my next post, I will discuss collections done by company brands and try to list jewelry designers to help start those types of collections. I hope this helps in some way and thank you for taking the time to read my blog.