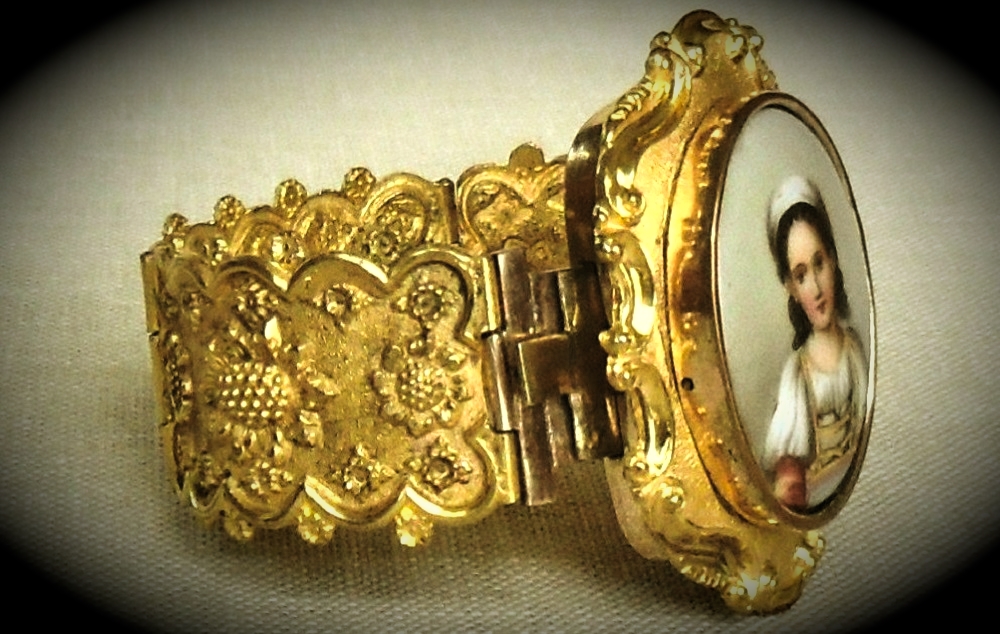 Antique Jewelry, with imitations and simulated jewels, have been family heirlooms for centuries. Long before the term costume jewelry, Jewelry made from Pinchbeck with diamante or paste. Although not made with precious metals or gems, Kings and Queens actually preferred these imitations to their more expensive counterparts.

The use of Pinchbeck in Antique Jewelry

Gold in the early 1700’s was both scarce and expensive. Only the very rich Aristocrats and Royalty could afford jewelry made from the precious metal. Gold was a status symbol, the mark of a person’s position in life. Still, even those who could afford gold sought an alternative for fear of robbery when traveling.

Over the years there had been several attempts to develop something with the appearance of gold. While alchemy had been studied since the first crusade. Yet all attempts had failed up to this point, as substitutes quickly lost their luster.

Then in the early 18th century Christopher Pinchbeck a clockmaker from England developed an alloy using copper and zinc in specific percentages. This was a form of brass which closely resembled 18k gold.

While Pinchbeck closely guarded his secret formula word spread about the durable substituted and its miraculous appearance. Soon others were attempting to copy the formula with various success.

Eventually, the formula did came to light.and the new invention spread throughout Europe as seen in the beautifully detailed French made bracelet above.

The eighteenth-century law restricted the purity of gold to be no less than 18 karats. While the ability to gold plate other metals had not come to pass. So Pinchbeck became the standard for imitating gold for over a century. Finally with the legalization 9 karat gold during the 1840’s along with the invention of rolled gold the use of Pinchbeck ended.

Origin of the Rhinestone in Antique Jewelry

While the loss of gold to highwaymen was a major concern. Other commodities also reaped handsome profits for these robbers. Prized possessions of precious jewels such as Rubies, Emeralds, and Diamonds displayed a person’s wealth and power. As the jewels worn by a person often presented their rank.

Although it isn’t known who first found the stones or who first began shaping them, Quartz crystals were discovered in the Rhine river of Germany. These stones were softer and easier to cut than a diamond. Yet they had a similar appearance.

Faceted in the same manner as a diamond. The Rhinestone, as they became known, received a flat bottom cut. Then mounted into a closed setting. Gluing the stone into its setting with a single drop of glue.

This gave the Rhinestone the illusion of an open culet found in diamonds of the era. As seen in this beautiful 18th century Quartz Rhinestone Ring to the right.

The price of a Rhinestone was far less expensive than the scarce diamond. Still, the Rhinestone was out of reach for the common population due to the labor involved.

Yet in all of its glory, the Quartz Rhinestone didn’t have the appeal needed to make the royal court.  Then in 1720’s jeweler Georges Frèdèric Strauss began experimenting with ways to improve the bling of the Rhinestone. First by coating the underneath side of the stone with different hues of metallic powder. Then by adding a metallic foil.

Ultimately, the supply of Rhine Quartz crystals.dwindled and the original Rhinestone craze was over.;

The invention of Paste Antique Jewelry

After the Rhinestone played out, Strauss, who had set out to improve them, labored on. Experimenting with leaded glass Strauss made it his life’s goal to improve the imitation diamond. By adding various minerals and salts to his leaded glass formulas the glass gems became more and more realistic.

While Strauss improved the sparkle of his new creations by adding bismuth and thallium to the raw leaded glass formula. He also began experimenting with various metal salts to alter the color of his imitation gems.

By 1734 the Strauss stone, as it became known, caught the eye of King Louis XV of France. The King, so enamored by the creations of Strauss, Louis XV titled Georges Frèdèric Strauss “King’s Jeweler”.

The Strauss stone became increasingly popular at court bringing Georges great wealth. Yet he continued trying to improve upon his jewels throughout his career. In 1753 at the age of 52 Strauss retired a wealthy man.

Originally these imitations began as a mixture.Then pressed into the shape of the desired gem prior to firing.

Once hardened into a glass these imitation jewels were more difficult to facet than a true diamond due to fracturing and the possibility of shattering the glass completely.

While the origin of the term “Paste” is unknown. It is speculated that it is due to the paste-like mixture used to produce the Strauss stone. Eventually becoming a term to describe the glass jewels themselves. After his retirement Paste remained virtually unchanged for over 100 years. 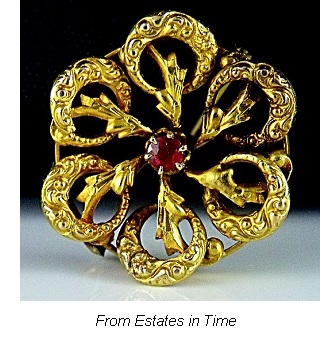 Paste Antique Jewelry into the 1800’s

Regarded as a valued commodity.for more than a century. Paste jewels were often set into gold and silver jewelry. While being worn by Royalty such as the king Louis XV of France, Marie Antoinette, as well as King George III and IV.

Throughout the Victorian era, the Paste stone was a must have for trendsetters and evening fashions. As the foil backed lead crystals came alive in 19th-century candlelit receptions.

Thus positioning Swarovski as a major player in the fashion jewelry industry into the 20th century. As a result, the Swarovski name became synonymous with famous vintage costume jewelry designers of the 1920’s and beyond.

The Creation of Berlin Iron

Out of all the imitation Antique Jewelry, I have discussed in this post, Berlin Iron was worn with the most pride. These were pieces of simple iron jewelry. Worn by both women and men as a badge of honor.

Most of Europe had been at war for fourteen years by 1813. While the Napoleon Empire cut a wide path across the continent. With Prussia under Napoleon rule since 1807.

The events of 1813 brought the hope of liberation to the Prussian Royal Family. Yet past warfare and foreign rule left little reserves to mount the uprising.

In 1813 a call went out to the people of Prussia to fund the liberation from Napoleon. The Prussian Aristocrats answered this call, donating their gold jewelry to form an army.

Touched by the deep civic pride their people had shown the Prussian Royal Family replaced each piece of gold jewelry with sand cast iron replicas often with the inscription “Gold gab ich für Eisen” (I gave Gold for Iron). These Iron castings, such as the one pictured above showed the beautiful details of the gold given for liberation of Prussia. Becoming a source of great honor to each person who wore them.

While some today feel that costume jewelry is worthless or cheap imitations. Simulated jewels and imitation jewelry has been made for centuries. Worn by people of stature who could easily afford true gems. This Antique Jewelry never referred to as costume jewelry until the 1920’s, was made with great pride. As seen in the examples shown in this article. These works were made with fine craftsmanship deserving the popularity they were given.