While the popularity of Vintage Southwestern Jewelry is sweeping the nation. It is only fair to remember the artist and the merchants that brought us to where we are today. Names such as Atsidi Sani (believed to be the first Navajo Silversmith). J L Hubbell (A Trading Post owner who hired Mexican Silversmiths to teach the art to local Navajo).  Fred Harvey (A Railroad Restaurant and Gift Shop entrepreneur). As well as owners of the many Indian Trading Post that sprung up along Route 66.

The art of creating jewelry from silver is fairly new to the southwestern Native Americans. First taught to the Navajo by Mexican artist in the mid-1800’s. The art form quickly spread throughout the Pueblo tribes, each developing their own style.

As the skill in Hammered Silver and Sand Casting improved, Native Americans began incorporating Turquoise into their works around 1880. There is a legend that Turquoise, “The Skystone”, formed by tribes of the Southwest Deserts crying tears of joy when rains came. Their tears mixed with the rain, seeping into Mother Earth to create Turquoise. 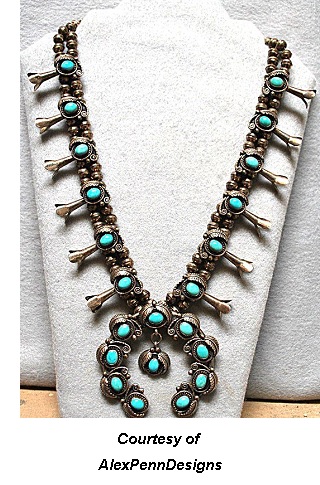 Today the Navajo Nation is renowned for their Silver Jewelry. A style created with heavy Silver designs often with chunky stones set into simple bezels. As seen in the Squash Blossom Necklace to the right.

Three important names associated with Navajo Silversmithing begins with Atsidi Sani (Old Smith). Sani’s real name became forgotten through the years. Instead, he became known as Old Smith due to his Blacksmith skills.

At an early age, Sani became interested in Mexican Ironworks used to make bridles. At the time the Navajo could only acquire these items through trade. Wishing to sell these goods himself Sani befriended a Mexican called Nakai Tsosi. Then around 1850 learned to work iron by watching Tsosi work.

Sometime after the Navajo Internment at Fort Sumner, Atsidi Sani learned Silversmithing. Then as his skills improved, he began teaching others the art.

Another important name, when it comes to the spread of Navajo Silversmithing is John Hubbell. Hubbell was an Indian Trading Post owner of Mexican descent. By 1878 John owned two trading posts in Navajo lands and continued to expand into the 1880’s.

During these years Hubbell would hire Mexican Silver workers to teach the Navajo. As a result, creating a valuable trade commodity for the Navajo people. John Hubbell was widely respected by the Navajo for his honest dealings and fairness with the people. A reputation which earned him the nickname Naakaii Saani (Old Mexican) out of respect.

The third name of importance when talking about Navajo Jewelry is Atsidi Chon (Ugly Smith). Although unproven, Chon reportedly was the first silversmith to incorporate turquoise into his art. Also, the first to make a Concha Belt. But what can be proven is that Atsidi Chon moved into the Zuni pueblo during the 1870’s and brought Silversmithing to the Zuni. 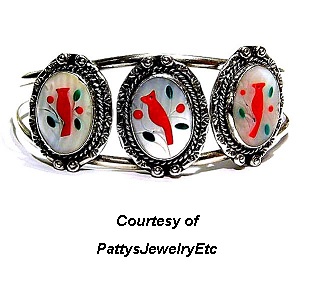 Although being taught Silversmithing by the Navajo. Zuni Jewelry is uniquely different. Where traditional Navajo jewelry is made with heavy Sterling artwork accented with large polished stones, Zuni pieces display their expertise in stone cutting and polishing.

For centuries the Zuni had been passing down lapidary skills from one generation to the next. Carving fetishes or small animal carvings from stone. For use in healing and religious ceremonies.

During 1872 Atsidi Chon moved into the Zuni Pueblo, staying with a Zuni tribesman called Lanyade. In an article published in 1944 by author John Adair, Lanyade tells the story of the Navajo’s stay and how he became the first Zuni Silversmith. 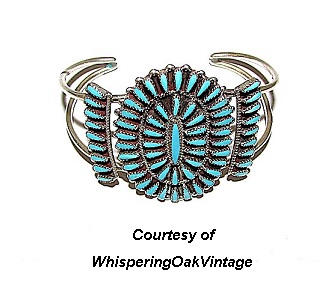 It’s an interesting story of how secretive the Navajo was about his skills and how Lanyade persuaded Chon to teach him the art of Silversmithing. Lanyade also tells the story how neither Atsidi Chon or himself ever set turquoise into the silver they made,

By 1890 there were several Zuni Silversmiths yet none were setting stones in their jewelry. In another article published in 1944, John Adair tells the story of Keneshde. The first Zuni to mount turquoise onto silver.

At the age of 25 Keneshde made his first bracelet of Turquoise and Silver which he sold for ten dollars. Soon word spread and other Silversmiths were asking to be taught

From there the Zuni skill in lapidary developed into the amazing pieces of work such as these pictured in this article. 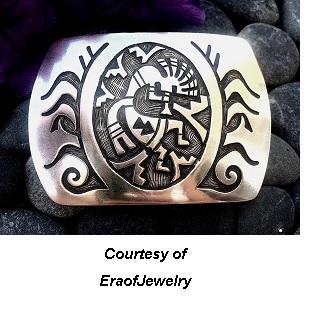 Reportedly the art of Silversmithing didn’t come to the Hopi until around 1890. In the article by John Adair, Lanyade speaks of visiting the Hopi to work silver, but doesn’t talk about teaching the skill. While other sources claim Lanyade taught a Hopi by the name of Sikyatala.

Whether this is true or not is unclear. Yet Sikyatala appears to be the first Hopi Silversmith. It is also clear that the Hopi didn’t decorate their silver with turquoise during this time. With Navajo, Zuni, and Hopi Silver works being indistinguishable.

Much later, around the late 1930’s the Hopi developed their unique style. A style referred to as an overlay. The process included two layers of silver sheet. The first layer textured, then darkened with liver of sulfur. While the second layer has the design carefully cut out. After which the two layers are fused together with heat, and the top layer polished to a shine.

By all accords, Fred Harvey is responsible for introducing the Native American, Southwestern Jewelry to the masses in Eastern America.

It was an era when the southwest was still considered the “Wild West”. with railway food rushed and just plain bad.

Setting out to change this Fred Harvey opened his first two diners in 1875 along the Kansas Pacific Railway. Offering fine cuisine and impeccable service.

Noticing the difference between Harvey’s restaurants and the average railway lunch counter. the Atchison, Topeka, and Santa Fe Railway signed their first contract with Fred in 1878. Originally known as the Clifton Hotel, Fred Harvey and his wife decorated the AT&SF Hotel immaculately befitting high society.

Soon everyone was clamoring over the food and accommodations of the Santa Fe resulting a string of Harvey Houses along the railway route. With well to do patrons traveling the rails to experience the Wild West and see the mysterious Native Americans.

True to the style of Fred Harvey the entrepreneur, hotel stops throughout the southwest were built with Mission-style architecture and matching decor. Also to fill the need of travelers wishing to purchase memento’s from their trip Fred hired local Native’s to make jewelry, pottery and woven goods which he sold in the gift shops of his hotels. 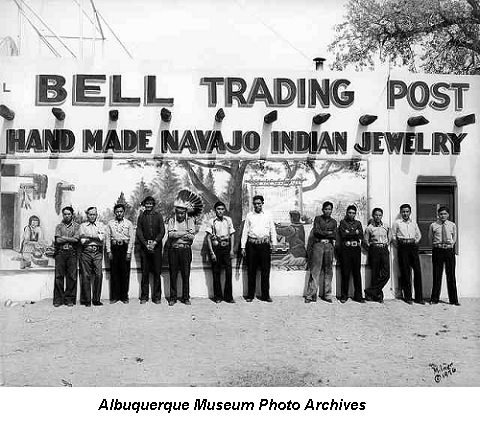 As railway travel gave way to the automobile a new highway opened in 1926 between Chicago and California, Route 66. Commerce was booming along the highway during the late 20’s as Mom & Pop stores sprang up. Then the Depression hit.

While life was extremely difficult during the Depression,  businesses along Route 66 fared somewhat better. Roosevelt’s “New Deal” and the CCC brought road crews to work along the route paving the highway and America’s new trucking industry carried goods across the road.

Although the tourist industry died with the onslaught of the Depression. Entrepreneur Jack Michelson saw a future and opened Bell Trading Post in Albuquerque.Taking a page out of Fred Harvey’s playbook Bell also hired local Navajo’s to hand-made the jewelry which they sold. Soon followed by Maisel’s Indian Trading Post, who also hired Native American jewelry makers.

After the Depression and tourism returned these two Trading Post along with the Fred Harvey Company supplied jewelry and other Native American wares to gift shops at most tourist attractions across the southwest. Well into the 1970’s.

Today Vintage Southwestern Jewelry is visible from many sub-cultures of the American lifestyle. Whether it is the Country Western scene, the Biker subculture, or Bohemian lifestyle, America resonates with the free spirit and resourcefulness of the Southwest. This jewelry makes a statement about the person wearing it. A statement of strength, courage, and independence. Much as the jewelry was meant to display many years ago when the designs were first stamped or filed into the silver by silversmiths of the 1800’s.