One of the most popular styles of collectible Jewelry today is the Christmas Jewelry Collection, and of course, the Christmas Tree pin is the favorite. As popular as Christmas jewelry is, it is sometimes amazing that the designs are for the most part 20th century creations. That is until you realize that most of our Christmas traditions are not that old themselves.

Many of the Christmas traditions we celebrate today have been passed down from the Victorian age. The Christmas tree, Christmas Cards, and Christmas gifts all became vogue during the 1800’s. Prince Albert’s marriage to Queen Victoria inspiring the British as he brought German customs to the isle.

The holiday, sparsely celebrated throughout the world prior to Victoria’s Coronation. Even outlawed in some areas due to pagan customs associated with Christmas revelry. Traditions such as the Yule Log, decorating the home with greenery, and even Caroling have their roots in Pagan beliefs.

A Christmas Jewelry Collection and the Christmas Tree 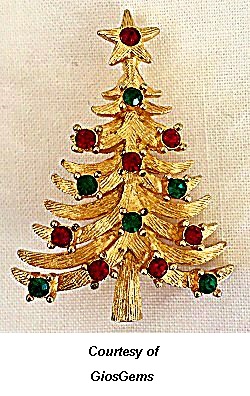 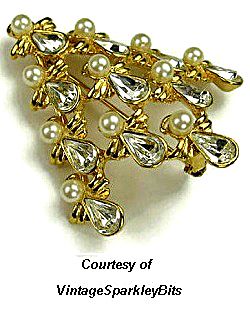 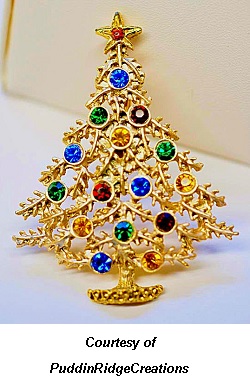 By far the most popular Christmas Jewelry to collect is the Christmas Tree. Which began to appear in earnest after the close of World War II. The popularity of yellow gold once waned near the turn of the century, returned to prominence by the close of the 1930’s. While brightly colored Rhinestone and Enamel reflected the public mood of the mid to late 40’s. 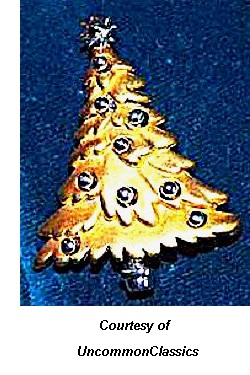 The war had ended and the whimsical nature of costume jewelry during this time was on full display. The holidays of 1946 and beyond became filled with festive spirits while companies such as Dancraft, Hollycraft, Mylu, J.J., and ART became prominent Christmas jewelry designers.

Collecting Christmas tree pins or other Christmas jewelry can be fairly reasonable. With many beautiful designs priced as low as $5, with an upper price ranging around.$45. 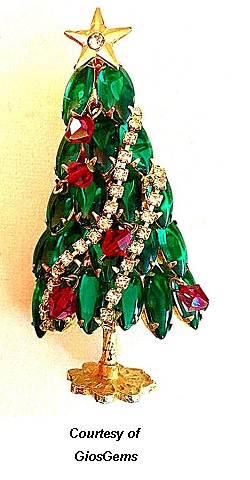 That’s not to say you won’t see far more expensive Christmas jewels. Companies who didn’t specialize in holiday jewelry such as Trifari, Eisenberg and  Hattie Carnegie also made pins. While you will be able to find some Christmas Tree pins by these companies in the price range I listed before. The price of their more rare pieces will start to rise.

One such pin is this Delizza & Elster Juliana Christmas tree pin to the left. Made especially for Harrods in London. A collectible and very rare pin around 50 years old. Made by a respected designer house for a single store.

Rare Christmas Tree pins produced by companies which made only a few Christmas designs or low production special edition pins can range anywhere between $100 and $400.

The book “Christmas Tree Pin” by Nancy Yunker Trowbridge which was published in 2002 is an excellent reference for anyone interested in starting a collection.

A Christmas Jewelry Collection of Other Holiday Designs 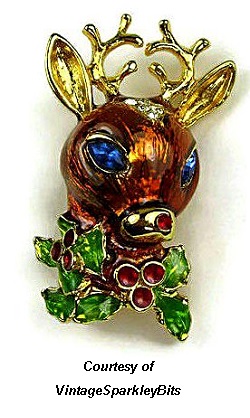 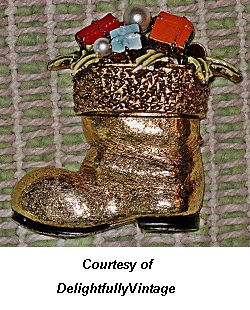 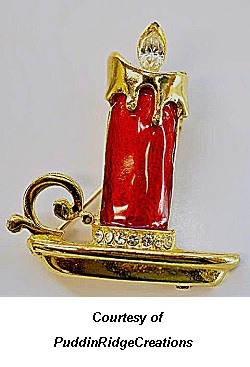 Although not as widely collected as the Christmas Tree Pin. Designers have created other Christmas pins in a wide array of motifs. In general, these types of Christmas Jewelry tend to be less expensive than the more popular tree. Ranging in the cost of a few dollars up. According to the designer, rarity, and what the pin is made of.

While mostly produced in both gold and silver tone base metals. Some designed use various plastics or wood. Still others designs use Pewter and Sterling Silver. Often coated with brilliant red and green enamels and sparkling Rhinestones in a range of colors. 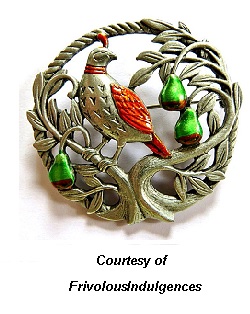 Probably the most collected Christmas pin which isn’t a Christmas Tree is the Partridge in a Pear Tree. In 1949 Bing Crosby & The Andrews Sisters released their version of “The Twelve Days Of Christmas” and various creative designers used the popular Christmas song for inspiration.

Companies such ART, JJ Jonette, Mylu, and Trifari, to name a few, made beautiful renditions of the Partridge pin. Today these wonderful designs have become sought after by collectors of Christmas Jewelry. 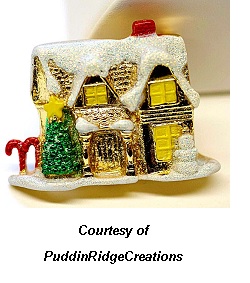 By the 1980’s designers began to create battery-powered Novelty pins. Widely popular at Christmas Parties through the 80’s, These pins came in several Christmas motifs such as Santa Claus, Rudolph the Red-Nosed Reindeer, and the Christmas decorated home shown to the left.

Normally made from plastic these Novelty pins either lit up or played a Christmas jingle. Cheaply made these novelties were never meant to last. Yet they have always been amusing collectibles. Still occasionally found in working order today. 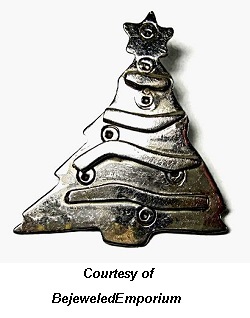 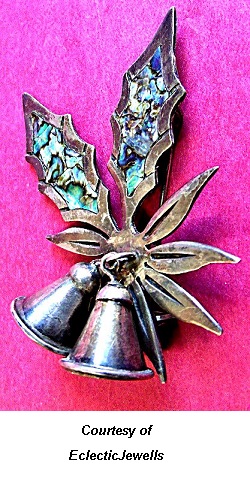 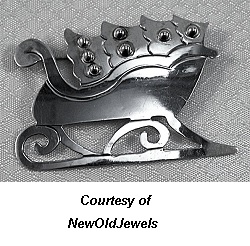 Overlooked by most Christmas Jewelry Collectors, the hand worked Sterling Silver Taxco Christmas pin is on another level. Some designs inlaid with Abalone Shell, Turquoise or other semi-precious gems. While Taxco jewelry, in general, is quickly rising in price, pieces can still be found for a reasonable price. Ranging anywhere between $20 and $200.

You can find many different Cross designs from hand-worked filigree to Crosses inlaid with semi-precious stones or Abalone shell. While you will also see Mayan and Aztec religious symbolism as well. Such as the Hunab Ku (Only God) pictured to the right.

The natural world has always played a large role in Native Mexican culture, which is reflected in Taxco jewelry. the imagery of Animals, Birds, Reptiles, Insects, and Plants are often worked into the Silver of Taxco Jewelry. The Jaguar considered a powerful image of ferocity, strength, and valor.

While some modern less traditional Mexican jewelry follow art movements such as Art Deco, Art Nouveau, and others Often inlaying a mixture of semi-precious gems into silver to create surrealistic and cubist designs.

None of which fall into the whimsical motifs seen in American Christmas designs. Which only makes the occasional Taxco Christmas jewelry find even more of a treasure.

With literally thousands upon thousands of different Christmas pins available today you are sure to find a collection to be proud of. So be choosy about the ones you purchase. Always buy the best quality you can find. But never sacrifice a pin just because it is missing a rhinestone to two if you really fall in love with it.

If you really love a Christmas pin that needs small minor repairs remember costume jewelry repair is actually very reasonable. Just be wary of damaged plating because it is really the only thing that positively cannot be repaired.