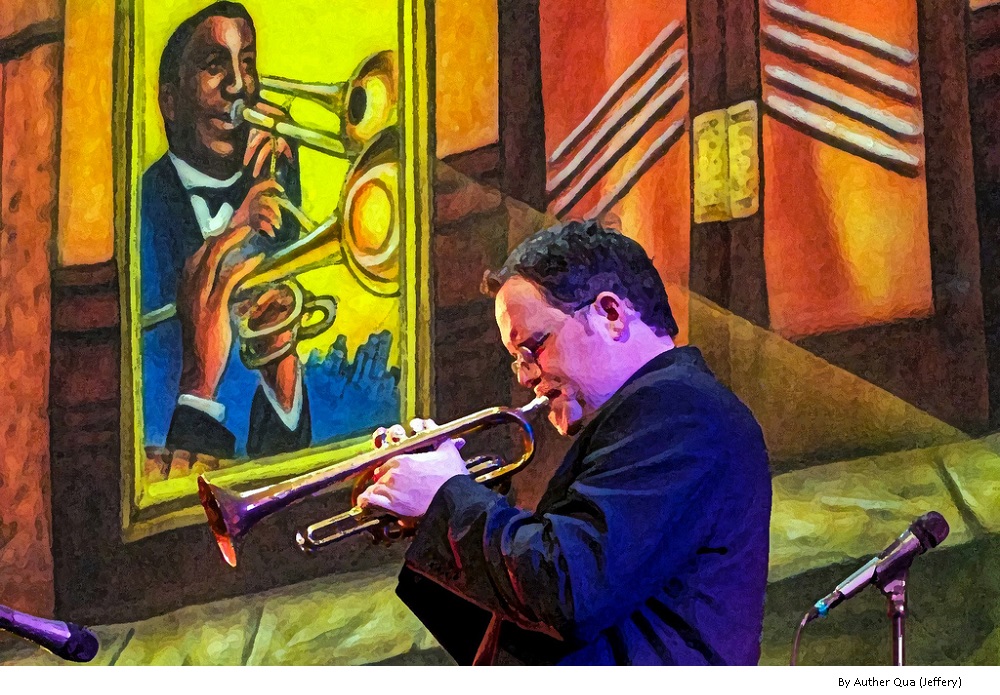 Most agree that the term “Costume Jewelry” was first coined in the Roaring 20s, but there seem to be two different schools on just who used it first. Some say Coco Chanel made the term famous, which may be true. She is definitely responsible for the acceptance of costume jewelry in the fashion world. Yet it is unclear if she actually coined the phrase.

The second version credits Florenz Ziegfeld of Ziegfeld Follies fame. Claiming Ziegfeld referred to the designs of a young costume designer who made jewelry to complement the costumes worn by Ziegfeld’s Girls, William Hobé. Although we may never know which story is true, and both do seem plausible. The Roaring 20s brought a unique change in the jewelry industry. Ushering in the age of jewelry designs were every woman could afford to be elegant.

Art Deco in the Roaring 20s

The events and experiences of World War I had a tremendous effect on women of the 1910’s. As men left to serve the country, women filled the empty factory positions, leaving the home. Earning their own money for the first time while gaining an independence they had never known before.  As well as a determination which finally pushed through the 19th amendment and women’s right to vote in 1920. 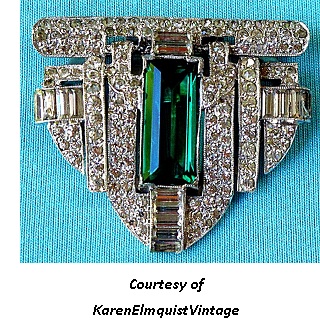 It was a new era and jewelry designs soon reflected the country’s desire to live life to the fullest. The idea of wearing jewelry purely for aesthetic reasons became popular during the Art Nouveau period. Then the Art Deco era went even farther.

It was the sentiment of the times that to wear any jewelry at all meant you were dressing up. Generally for a night on the town. In fact, wearing precious jewels during the day became thought of as vulgar.

Focusing on clean lines and geometric shapes, such as the stunning Art Deco pin to the right. The Art Deco movement cemented the idea that jewelry should mean more than just a display of wealth.

The move towards Rhinestones, plastics, and costume jewelry was on. As designers such as Chanel, Trifari, and Corocraft were creating inexpensive jewels. No longer did a Lady have to settle for one or two pieces of jewelry. Now she could afford two or three per outfit.

By the 1920’s yellow gold had lost its appeal, by far platinum had become the most desirable choice. Yet the expense kept this white metal out of reach for most. By the mid-1920’s white gold became popular to imitate the more expensive metal. While silver, sterling, and zinc became the favorites of Costume Jewelers to keep cost down. 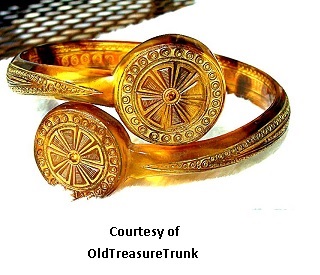 As early as 1917 American interest in Egypt was sparked by the movie “Cleopatra” starring Theda Bara. This along with explorations in the Valley of Kings, the world was ripe with expectations.

Then with the discovery of King Tutankhamen’s tomb in 1922, the fad exploded. Ancient Egyptian motifs are found.in every aspect.of the 1920’s culture. From Architecture to advertisements for dish soap.

Revival jewelry of the time was the one exception for yellow gold tones. While being unacceptable for modern jewelry, Egyptian Revival pieces were all the rage in yellow gold. Designs of everything from ornate headbands to armbands in gold tones complete the Revival look.Along with turquoise, red, and blue accents.

Costume Jewelry Designers from Napier, Monet, and Lisner created brightly enameled regalia depicting falcons, cobras, and the eye of Horus. Other imagery included Pharaohs, the Sphinx, and Tutankhamen charms. The allure of an ancient culture and its mysterious symbols had captured the American imagination.

For me, any discussion of the Roaring 20s always conjures images of the Great Gatsby. January of 1920 ushered in Prohibition to the United States, and along with it came Speakeasies and Jazz music. With estimates of 100,000 Speakeasies in New York City by 1925.

Referring to the 20s, songwriter Hoagy Carmichael once said: “They came in with a bang of bad booze, flappers with bare legs, jangled morals and wild weekends.”

The young women of the Roaring 20s, known as Flappers, had a style and fashion of their own. Like the Hippies of the 60’s, the Flappers had a disdain for acceptable behavior and openly flaunted their desire to be different. Wearing short skirts, and bobbing their hair, while listening to jazz music.

Flapper Necklaces of the Roaring 20s

Costume jewelry necklaces of imitation pearls or colorful beads in long strands of 60 inches or more were worn in a single strand. Allowing them to swing wildly on the dance floors of Jazz clubs.

Another widely popular necklace of the era was the Sautoir. A fairly long necklace with either a tassel or large single accenting pendant fixed to the bottom.

While both of these necklaces were worn by Ladies who conformed to society’s norm, Flappers found new ways to display their rebellious nature.

Generally, Flappers wore the long beaded necklaces down in a single strand, where the older generation doubled or tripled the strand to fit closer to the neck. In a similar act of defiance, the gemstone pendant of the Sautoir would be drawn up to one shoulder, while a tassel might be dropped down the back to draw attention to the open back dresses of the day.

The short bobbed hairstyles and low-cut necklines of 1920’s fashions exposed the neck which begged to be decorated. One such necklace that added color and designs were the Dog Collar necklace. Fitting closely around the base of the neck. These collars were too long to be considered Chokers and too short to fit into any other category. 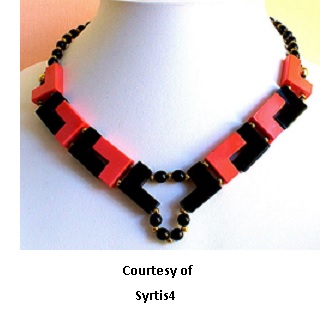 In bold Art Deco designs and colors. Combining bright colors such as red, white, or green with black to create popular palettes of the generation. While geometric shapes were easily formed with plastics such as Bakelite and Celluloid.

During this time earrings were worn to make a statement. Not just a matching accessory for a necklace, but the starting point to build from. Filigree white metals were ever popular as were dangling pearls both real and imitation,

For the more formal gathering, the earrings would match the Ladies hairpin or headband, while evening wear was more daring. As with the long flapper necklace, these sparkling earrings would move and flash on the Jazz Club dance floor.

Actresses such as silent film star Lucy Doraine and Mae Murray made it popular to pull their long hair back on one side and wear a single dangling earring as a statement piece. 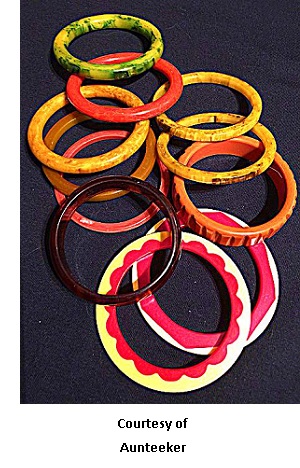 Then there are the bangles, the original stack Flappers wore these colorful rings of plastic, wood, or metal all the way up the arm. The more the better. Wide, or thin, carved, or encrusted in sparkling jewels the bangles made a distinctive “Clack” with any movement of the arm. It was just as important to be heard wearing a stack as it was to be seen.

The softer Celluloid bangles were often decorated with rhinestones or other forms of art glass. Many of Miriam Haskell bangles were hinged with embedded floral designs of beads and rhinestone.

As a nod to the Egyptian Revival prevalent during the era. Golden toned bangles in the shape of Cobras were sometimes worn high around the bicep. As seen in the movie “Cleopatra” from 1917.

Headbands and Wraps from the Roaring 20s 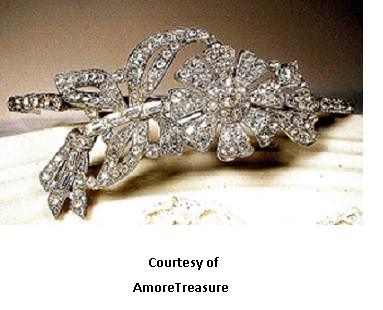 And finally the Headdress, no Flapper outfit would be complete without some sort of Headband or Wrap. Whether it was a sparkling Rhinestone band, shimmering skullcap, or a ruffled feather hair clip a young 1920’s lady knew how to dazzle her short flapper hairstyle.

Decorated with Precious and Semi-Precious Stones, Rhinestones, Pearls, and Feathers there were six different styles of headdresses. With just as many, if not more ways to wear them. While the simple Cloche hat or a tied scarf were worn during the day. When the evening came, that is when the bling came out.

Made popular by Flapper movie actresses, the Jazz clubs were filled with young women dressed to kill sporting glimmering headpieces. Every young lady owning a collection of her favorite styles.

Every generation has their rebellious years, with the desire to stand out and be different from the generation that went before. The 1920’s had the Flappers and they became icons still marveled today. It was an age of sparkling bling, beaded fringe, and wild times. With nights spent dancing the Charleston, Black Bottom, and the Lindy Hop to Jazz tunes while drinking illegal booze.