Said to have fallen from the treasure chest of a mermaid. In the folklore of Greek and Roman myths, Aquamarine became the sacred jewel of Neptune. Believing the jewel had powers to claim stormy waters as well as protect seafarers from peril. While early Romans referred to the stone as the sailor’s gem. With first documented use in ancient Greece ranging between 480 to 300 BC. 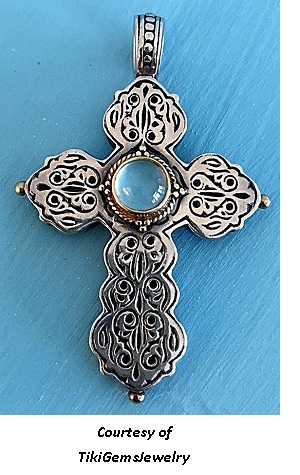 In the first century AD, Roman philosopher Pliny the Elder wrote in his works “Natural History” describing the jewel. “The lovely aquamarine, which seems to have come from some mermaid’s treasure house. In the depths of a summer sea, has charms not to be denied”. Also, early Christians associated the gem with the Apostle Saint Thomas. As he traveled the Mediterranean Sea to preach the Gospel.

With these legends from ancient Rome as well as the stone’s association with water. Roman fishermen gave the name to this blue-green gem, Aquamarine. A Latin term which loosely translates to Seawater.

From these early times into the Middle Ages, the belief of the jewel deriving its powers from water persist. While becoming a jewel of prophets, mystics, as well as healers.

Mystics telling fortunes by suspending the stone on a string above a bowl. Where the bowl has letters of the alphabet printed along the rim. Filled with water and the jewel just touching the water. Mystics answered questions for their clients by spelling out words as the jewel moves to touch each letter.

In turn, Healers believed that if the jewel’s powers began to wane. By soaking Aquamarine in water overnight, the jewels full powers would return.

Aquamarine Throughout the Ancient World

Although the Roman culture held strong beliefs in the jewels protection at sea. Many other Roman fables spoke of Aquamarine in a different light.

One such tale combines the Roman association of fertility and harmony with frogs. Along with the writings of Damigeron. Which professed Aquamarine’s power to purify water, in the manuscript “De virtutibus lapidum” (The virtues of stones). Due to these legends, a Roman folklore was born. Where enemies could become friends by serving water from an Aquamarine chalice with the inscription of a frog.

By the second century, BC Egypt began importing the jewel from India. Possibly under the influences of Rome. While Lapis is the prominent gem of ancient Egypt, Aquamarine became a symbol of happiness and everlasting youth. Using the Roman association to the sea, Egyptians related the new gem to Turquoise. A stone which symbolizes the sea in their culture.

As with most desert civilizations, the sea is a symbol of happiness and cleanliness. While being a source of food as well as a mode of transportation.

During this era, Rome had many subjects including the Hebrew. Who eventually adopted parts of Roman culture to fit within their own beliefs. To the Hebrew, the translucent jewel signified tranquil waters and safe journeys under clear skies.

As the source of Aquamarine during these times. It is only fitting that India too should have beliefs and tales of the jewel. In Buddhism, the gem is a symbol to remind one of the ocean, of love, and mercy. From these ideals the tradition of gifting a new bride the gem the morning after her wedding was born. As well as the thought that Aquamarine has the power to renew old love. While many of the medical uses attributed to the jewel also have their roots in Indian lore.

Aquamarine into the Middle Ages

By the turn of the Middle Ages rulers, and nobles alike sought out sorcerers as their mentors and advisors. These soothsayers predicting the outcome of wars or conjuring up a prophecy which predicted the steps a ruler should take to benefit the kingdom’s reign.

While a wide range of methods was used, from reading tea-leaves to the reading of one’s palm. The Crystal Ball became a tool many would use. With many claiming the Aquamarine crystal to be the most effective. Especially under the forces of a full moon. Where it is said the magnetic pull of moon intensifies the crystals power.

In 1377, William Langland wrote “The Vision Concerning Piers and the Plowman,”, In which he uses the teaching of Damigeron to proclaim Aquamarine’s powers to purify and protect one from poison. A theory which soon spread across Europe.

This was a time when Kings and nobles often feared poisoning at the hands of their enemies, as this was a common practice during this age. Amulets of the blue-green jewel soon became a familiar article worn by noblemen and rulers alike. While many crown jewels were fitted with Aquamarine. 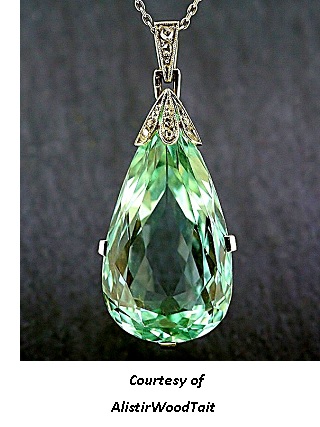 The Crown of Saint Wenceslas or Czech Crown was commissioned in 1347 for the coronation of Charles IV. Surviving today as the fourth oldest crown in Europe. The stunning golden crown is encrusted with one hundred and sixteen precious jewels, including a single Aquamarine mounted into the golden cross atop of the crown.

There is an old Czech legend which says that any tyrant.who places the crown upon his head shall die within a year. As the Crown is the property of St Wenceslas. With only a rightful Bohemian king wearing the crown during his coronation.

The legend tells that the Nazi official Reinhard Heydrich placed the crown on his head while inspecting St. Vitus’ Cathedral. Thereby sealing his fate. Less than a year later the Czech resistance was able to assassinate Heydrich in Libeň.

Still older, the Crown of Saint Stephen or Holy Crown of Hungary appears to have been sent to Hungary in or about 1001. By Pope John along with his blessing for Stephen I’s coronation. Originally the crown was void the sailor’s jewel, yet in 1608 King Matthias II had two Aquamarine jewels added for his coronation.

As mentioned above, the gem’s uses are far more often in tiaras, necklaces, brooches, and earrings than crowns themselves. While many jewels became heirlooms, stolen, or broken apart to create a new design through history. Few match the splendor of Queen Elizabeth’s Brazilian Aquamarine Parure. A set gifted to the Queen by Brazil which includes a necklace, earrings, brooch, and bracelet. To which the Queen added a tiara in 1957.

Aquamarine From the Past into Today 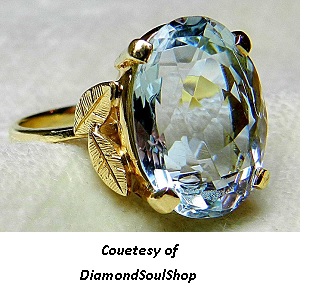 Today Aquamarine celebrates the birthstone of March. While using the ancient beliefs of old love’s renewal to become the accepted gift for the 19th wedding anniversary.

As public opinion has changed over time, the strong bluish tint has become more popular than the natural blue-green shown in the antique pendant above. As a result, most gems today have been heat-treated to altering their color. While both the natural and altered jewels are truly beautiful. It is becoming extremely hard and expensive to find natural Aquamarine jewelry,

Whether chosen as an alternative jewel for engagement or simply a gift of friendship the Aquamarine has a long history. Filled with symbols of love and protection.

2 thoughts on “Legends and Folklore of Aquamarine, the Scared Jewel of Neptune”