On October 29th, 1929 the Great Depression struck, it changed the world, as well as its view of 1930s Costume Jewelry. Mere days before fashionable dresses cost $24 or more. Yet a short time later stores would have trouble selling them for $4. From clothing to jewelry every sector of the fashion industry began to struggle. As necessities became a priority while luxuries took a back seat.

During the onset, fashion moguls scrambled for survival. Through simpler designs and cheaper materials, clothing designers cut cost. With the new lines in sharp contrast to the fashions of the previous decade. These drab ensembles screaming for some source of flash, glitz, or glamor. Yet Jewelers were feeling the same pinch.

Fortunately for jewelers, the advances made during the 18th and 19th centuries, Paste, German Silver, and modern plastics designers were able to create extravagant imitations. While lowering their cost from true gems and precious metals.

By 1930 sound filled movie theaters replacing the silent movie, as the silver screen became one of the few escapes from the troubled world. With the glamor of Hollywood inspiring women to wear more jewelry. Where jewelry of the Roaring 20’s reflected simple lines and taste, the 30’s brought flamboyance and glitz. The much-needed accessory.to brighten the fashions of the day.

While names such as “Carl Art”, “Danecraft” and “Hollycraft” had their begins during the 1930s few had the storyline to match Eisenberg. 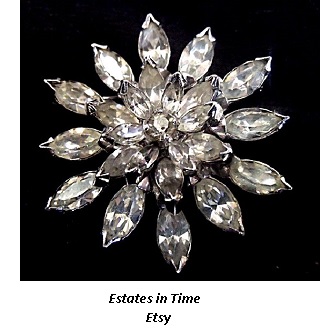 Frist incorporated as a ladies clothing and perfume company in 1914, the Depression greatly diminished Eisenberg’s sales. Forced to cut cost as so many other industries just to survive, Eisenberg’s clothing line was in serious trouble.

In an effort to add some pizazz to their dreary line the company struck upon a marketing campaign. By developing a series of free costume pins given as part of each outfit Eisenberg hoped to increase their sales.

Yet Eisenberg had no idea just how popular their costume jewelry would become. Almost immediately women clamored for the new jewels. With retailers reporting pins being removed from Eisenberg dresses.

Heeding the advice of retailers across the country Eisenberg started selling their own line of costume jewelry in 1935. With designs such as the Eisenberg Original pin above.

Another famous clothing designer which also sold high-end costume jewelry is Coco Chanel. While Chanel created her first line in the 20’s with a focus on costume jewelry. In 1932 she released a line which is credited with saving the diamond industry. During the Depression, the diamond industry faced increasing hard times. Budgets simply could not afford the precious gem.

Yet in November of 1932 Chanel unveiled a collection of 35 pieces featuring authentic diamonds which she named “Bijoux de Diamants“. In true Coco Chanel fashion, the collection consisted of celestial motifs. Such as comets, stars and the sun along with fanciful feathers, bow ties, and fringe.

The 1930s costume jewelry was all about sparkle and white on white designs. With Hollywood’s sway over the direction of fashion, Movie Producers instantly understood sparkling clear jewels stood out on the black and white silver screen. While the jewelry industry quickly mimicked the latest release. Setting clear rhinestones into zinc and nickel silver to create affordable costume jewelry which copied the trends.

As the 1920’s faded so did the Bobbed cut. Actresses such as Betty Davis, Jean Harlow, and Norma Shearer ushering in the Wave. As women began to grow their long once more. Often with waves or curls sweeping to one side.

By the 1930’s women felt they had won their push for equality. They had won the vote and were now ready to return to a more feminine look. A look which accented their beauty.

As with so many trends, Hollywood embellished the lush, full hairstyles which begged for decorations. As designers created sparkling Combs and Barrettes similar to this beautiful hair piece on the left.

Encrusted with sparkling clear rhinestones and imitation pearls. These accessories added an eye-catching flash to a ladies hair, sure to get her noticed.

Celestial motifs of starburst and the sun were extremely fashionable during the decade. A theme in which these sparkling accessories fit into with ease and made popular by the designs of Coco Chanel. As pearls, another favorite of Chanel was given new life as well. No longer seen simply as a bead to be strung into a necklace, pearls were used to embellish brooches, bracelets, and headdresses as seen in the hair comb above. 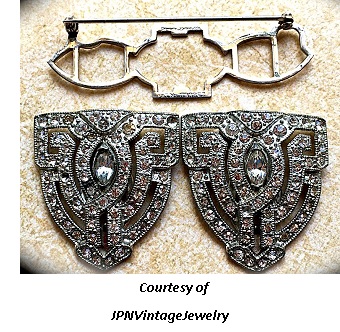 Dress clips and brooches became an intricate part of the 1930’s outfit. Indispensable for brightening the clothing of the era.

Through the decade It became increasingly popular to wear two matching pins, as they were sometimes sold in pairs. Worn on each side of the neckline or together as a statement. These beauties were a must for the drab 1930’s fashions.

This trend became such a fad that in 1931 Coro patented a device allowing two clips to be worn as a single brooch. The “Duette” as it became known was a huge hit and soon other designers such as Trifari came up with their own versions.

To the right is a beautiful example of the Coro Duette in geometric designs and sparkling rhinestones.

The dress clips quickly became the most versatile piece of 1930s costume jewelry. As resourceful women of the 30’s found endless ways to use the dress clip to spice up an outfit. From decorating a hat to a scarf or a handbag to her shoes.

Here again, the use of celestial motifs, sparkling clear rhinestones and imitation pearls are prominent during the first half of the decade.

One trend that remained strong from the 1920s were the stacks of bangles. Although bangles, as well as other bracelets, became tighter around the arm. With the introduction of sound into cinema, the loud clacking noise Flappers enjoyed became unacceptable in movie production. So once again Hollywood dictated the direction of fashion. 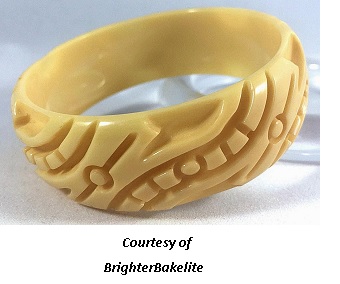 Bakelite became widely used during the 30s due to its inexpensive cost. Sometimes encrusted with rhinestones for that extra flash or carved with intricate designs as seen in the bangle to the left. As with other jewelry from the era, light colors were prominent keeping with the Hollywood trend.

While bracelets by design houses such as Eisenberg, Coro, and Trifari are extremely flashy with clear sparkling rhinestone set into silver-tone metals. A standard for the Starlets of Hollywood both in the movies and on the Red Carpet as well.

And of course, there are the pearls, Coco’s favorite. Whether embellishing a rhinestone bracelet or strung into a multi-strand bracelet imitation pearls accents a wardrobe in classic refinement. As Chanel once said, “Fashion passes, style remains”.

Another holdover from the 20’s is the long beaded necklace. With long strands of glass beads becoming the favorite.  Coco’s glass pearl beads were ever-present as well as the creations of other designers.

As America began to recover from the Depression during the second half of the decade, the color started to return to jewelry.

As color became fashionable again women began to coordinate the long strands with each gown they wore. Often owning pieces of jewelry specifically for each outfit.

Another emerging trend in the latter 1930s is the use of floral and nature motifs. With Birds, feathers, flowers, and leaf designs prevalent.

As seen in the glass bead necklace to the right. More than likely a necklace was chosen to accent a summer dress, as pastels where popular summer colors.

It was during this time, from the mid to late 30’s, Alfred Philippe of Trifari copied Carter’s design “Tutti-Frutti”. While Carter’s creation featured precious gems carve into the shapes of miniature fruit. The Trifari imitations used pressed glass in their 1930s costume jewelry. A style which was fondly referred to as “Fruit Salad Jewelry”.

Yet today the term has a broader meaning than in the 30’s. Originally it was the shape of the stones, not the color which made certain pieces of 1930s costume jewelry “Fruit Salad”. However, today people often refer to any early colorful costume jewelry which resembles a bowl of fruit as “Fruit Salad” regardless of the rhinestone shapes. 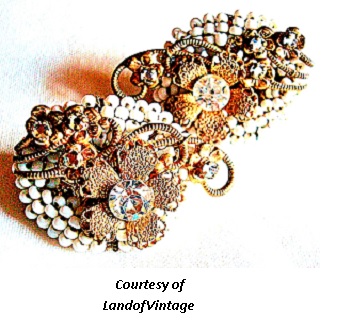 As the taboo of pierced ears continued into the 1930s screw back earrings had reigned supreme since the start of the 20th century. Yet in 1931 a new design emerged, the clip on earring, allowing an artist to design decorations high upon the earlobe in compact displays.

These new styles became immensely popular for daily wear, as ladies hair grew longer while their earrings grew shorter and closer to the ear. The “Button Earring”, similar to the Mariam Haskell design to the left, became all the rage. As domed or flattened buttons were decorated in various fashions.

Matching sets or Demi Parure sets of earrings and bracelet or brooch is another signature of the 1930s. Made from brightly colored Bakelite in the latter half of the decade. 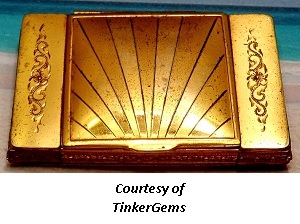 The 1930’s had been a decade of change, the simple lines of the 20’s had turned to flash and extravagance. As women had turned away from bobbed hair and trended to a more girlish feminine look. Wearing makeup became vogue during the 30’s and carrying stylish mirrored compacts became a must. As ladies wanted to ensure their make-up was still in place throughout the day.

Sparkling flash first replaced color then subsided as color returned and the geometric lines of Art Deco slowly gave way to floral designs By the end of the 30’s yellow gold tones began to make a comeback. As it had dropped from favor at the turn of the century.

Through it all, inexpensive costume jewelry had helped women feel glamorous, during the decade of hardships. These simple imitations had made cheaply made dresses look like a million bucks while accessorizing them with multiple looks.

By the end of the decade, 1930s costume jewelry had cemented its position in the fashion world. Not only had it became accepted, the sparkling glass jewels and imitation precious metals had become a necessity for a Lady’s wardrobe.

2 thoughts on “The 1930s Costume Jewelry and the Great Depression”