While many claim the June Birthstones to be Pearls and Alexandrite the American Gem Society also includes Moonstone. Yet this hasn’t always been true. Most experts agree that the idea of birthstones has their beginnings as far back as Moses. With the gemstones decorating Aaron’s Breastplate as described in the Bible as well as “Antiquities of the Jews“. A book by the Jewish historian Josephus in the first century AD..Where both agree Agate is the chosen gem for June. Although at times throughout history the jewel Citrine is also popular.

In these previous eras of ancient times, color and metaphysics are the determining factors in choosing which jewel is the most powerful for each month. While these early beliefs and legends give us wonderous tales and folklore, offering a window into the past. The association of certain gems to each month passing down through the ages.

The list of corresponding jewels changing to fit different beliefs and cultures throughout the ages. A tradition which flourished throughout Europe and the Middle East. Yet remained largely unknown in the new worlds of the Americas until the late 19th century.

As a marketing campaign in 1870 Tiffany and Company published a pamphlet of poems. The poems connecting each month of the Gregorian Calendar to a list of gemstones. Yet as gem reserves fluctuated Tiffany began to change poems to replace gems as needed to meet their supplies. As a result in 1912, the National Association of Jewelers decided to set a standard. Naming Pearls and Moonstones as the birthstones of June. This list holding true until 1952, when Alexandrite became the third birthstone of June.

Named the worlds oldest gem known to man Pearl legends and history abounds with mystery and intrigue. Mentioned in Chinese proverbs as far back as 2206 BC. The pearl became a favorite gift given to royalty in China.

A rare and precious jewel, the center of pearl trade has traditionally been in the regions surrounding the Persian Gulf. Where Arab folklore claims the creation of pearls are from oysters swallowing dewdrops as they fall into the sea.

Throughout history, the Pearl has been a treasure around the globe. From the southern Indonesian seas, northward into Japan and westward to the new worlds of the Americas.

While ancient Vedic texts of northern India state, “The teeth of the great demon Vala, scattered throughout the celestial regions. Fell like stars into the oceans below. Becoming seeds for a species of gems with the luster of full moonbeams. Entering into the shells of oysters lying within the ocean depths, these seeds became pearls.” 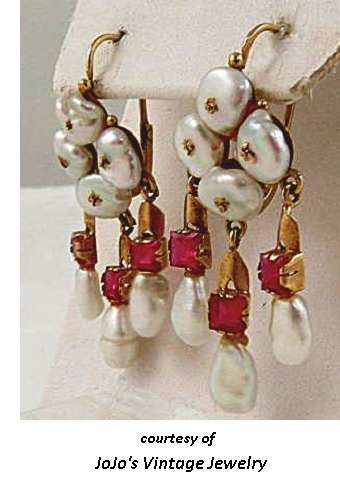 I
n Egyptian folklore, Cleopatra is said to have won a wager with Marc Antony by dissolved a pearl into her glass of wine to prove she could consume a fortune in a single meal. A story recounted by Pliny the Elder in his book “Natural History”.

Many historians believe Rome’s invasion of England was due to Julius Ceaser’s love of pearls. As the freshwater pearls of Scottland are the finest pearls in the world during 55 BC. Also during the reign of Ceaser, Roman women became increasingly infatuated with the precious gem. Leading the men of Rome to complain their wives could wear an inheritance in each ear.

Eventually, asking the Senate to petition Ceaser for his intervention. Whereupon the Emperor forbid women below a certain status from wearing pearls.

June Birthstones the Pearls of Europe and Beyond

With the fall of Rome in the 5th century AD. and the pillage of great Roman treasures including hoards of pearls by the Goths. The treasures spread across western and northern Europe as spoils of war divided between the territorial Lords.

While pearls decorate all the crown jewels of Europe surviving today. The popularity of the gem as personal decoration for the most part non-existent. Until the Crusades of the 12th and 13th centuries. When returning crusaders brought back not only gold and jewels. But also the knowledge and craftsmanship of the Moorish and Byzantine cultures.

Without the skills to facet jewels during this era the pearl, with its natural iridescent sheen became supreme. Both men and women clamoring for the precious gem, even with limiting supplies. This would all change in 1498. On the third voyage of Christopher Columbus, the explorer came across natives on the Island of Cubagua wearing strands of pearl ornaments. The discovery of pearls in the new world ushering in the Pearl Age of the 17th and 18th centuries.

Moonstones, Second of the June Birthstones 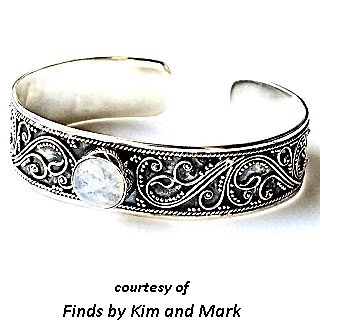 in the ancient Vedic fable of Vishnu and the demon Bali, the sparkle of the Bali’s eyes turned to moonstone as the beast tore apart and fell from the heavens. Considered the sacred stone of India, early Hindu legends claim moonstones form when moonbeams solidify.

Even to this day, it is a requirement in India that moonstones lay on yellow cloth when the gem is for sale outside. As yellow is a sacred color.

In Asia, there is an ancient myth that the ocean’s tides bring in blue moonstones once every 21 years. While the moving light inside the jewel is a living spirit.

Thought to be a good luck charm and a talismanic jewel of winter. Moonstone became a customary gift for each 13th year of marriage. Since the powers of the gem are thought to wash away curses of the number 13. 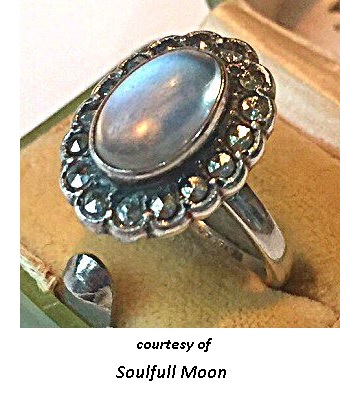 Between the second and fifth century AD. the Hindu deity Ganesha began to emerge. Widely revered as the remover of obstacles. A moonstone is often placed on the Hindu god’s forehead. Representing the third eye. Due to legends of the gems power to aid in clairvoyance. According to folklore prophets could unlock the future by holding a moonstone in their mouth under a full moon.

Adopting the beliefs of India, the Greek, and Romans also associated the moonstone with moonlight. Glorifying the June Birthstones in their mythology of love and the moon. With tales of passion igniting when lovers wore the jewel under moonlit nights.

The Popularity of June Birthstones the Moonstone in Modern History

As ancient pagan beliefs wained the moonstone remained popular as a jewel of fashion. As the Art Noveau movement became increasingly fascinated by the jewel’s play on light.

An artisan revolt against the industrial age of machine-made jewelry.  Art Noveau lends itself towards natural shapes with a feminine theme. The adularescence effect of moonstone accenting the soft, curved lines in silver or platinum. Although short-lived, jewelry from the Art Noveau movement remains some of the most sought-after jewelry from the turn of the 20th century.

Some fifty years later moonstone would once again regain its popularity in the 1960’s with the hippie counter-culture. As the youth of the 60’s embraced meditation, yoga, and cosmic adventures age-old Hindu beliefs filtered in. With pop icons such as the Beatles spreading the interest of Eastern religions into the Western world. While gemologist embraced the oriental custom of using the Moonstone as the 13th wedding anniversary jewel.

Alexandrite the Rarest of June Birthstones 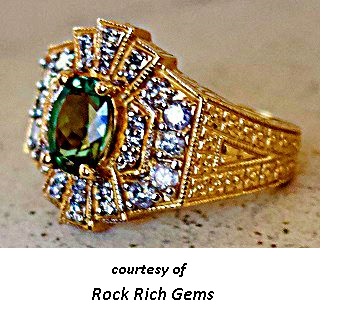 First discovered in 1834 Alexandrite is not only the rarest of colored gems it is also the most modernly discovered gem. Without ancient fables and legends attributed to most precious gemstones.

Yet there are some intriguing tales surrounding the color changing jewel. In the story of discovery, miners were working in the Ural Mountains of Russia in search of emeralds. One day a Finnish miner by the name of Nils Gustaf Nordenskiöld gathered a few gems the color of emeralds. Yet that night as he inspected his finds by the evening campfire the stones glowed a brilliant shade of red.

At first confused, the miner realized the next morning he had discovered something truly amazing. When under the light of day the jewels were once again mesmerizing shade of green associated with emeralds.

After the discovery of Alexandrite, the gem quickly became the national stone of Russia. Named after Alexander II the heir apparent to the Russian Throne. 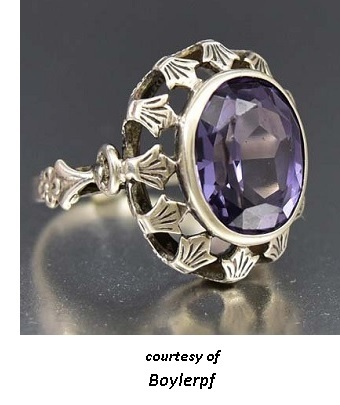 While the gem became a coveted jewel of the Russian upper class, fascination with the color changing stone soon spread around the globe. Leading Tiffany’s master gem buyer, George Kunz, to purchase vast quantities of the rare gem. Stocking the reserves of Tiffany and cornering the market for decades.

With the only source of Alexandrite in Russia dwindling. The growing popularity of the rare stone pressed Jewelers to develop a man-made substitute. In 1909 the first man-made Alexandrite is grown. Yet the high cost of creating these man-made gems does little to lower the cost of Alexandrite jewelry.

Alexandrite Accepted as One of the Three June Birthstones

For the next fifty-eight years, the source for these color changing stones is either resale of existing jewels or synthetic. Then in 1952 Alexandrite became accepted as an alternative to pearls and moonstones as the birthstone of June.

Then in the 1960’s, Brazil became the second source with a new discovery. Yet in this new source, the stones have a slightly different coloring. Offering a reddish purple hue under artificial light and rich verdant greens by day. Later other sources would also be found in India, and Tanzania as well

The birthstones of June offer an array of interesting fables, folklore, and history.  From the oldest jewel man has ever known to the rarest of rare jewels just recently discovered. Each one said to bring good luck and fortunes. While it has never truly been proven these gems are a source of such tidings. It can not be denied a child born during the month of June are lucky to have these three jewels to choose from.