With the passing of Memorial Day and the 4th of July just around the corner, the history of Patriotic Costume Jewelry comes to mind. With the World just recovering from the Great Depression, and the invasion of Poland in 1939 the stage is set for the 1940’s.

Each of the prior three decades had seen changes and turmoil with World War I. Then prohibition and social unrest of the 20’s. Only to be followed by the Depression and now World War II is looming on the horizon.  As a result of the world’s unrest, fashion would once again reflect the social climates facing the century.

Looking back we can see how designs mirror the events of each decade. Just as patriotic costume jewelry themes became prevalent in the 1940’s.

Many of the design artist for popular jewelry houses were immigrants themselves. Due to this, there were strong sentiments throughout the industry. Therefore companies such as Acessocraft, Monet, Corocraft, and Trifari often donated proceeds towards the war effort. As well as sponsoring private relief organizations such as the “British War Relief Society”, and “Bundles for Britain”. 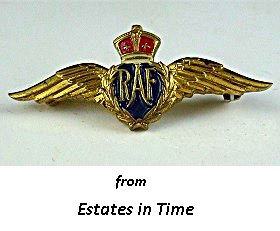 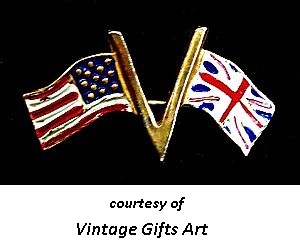 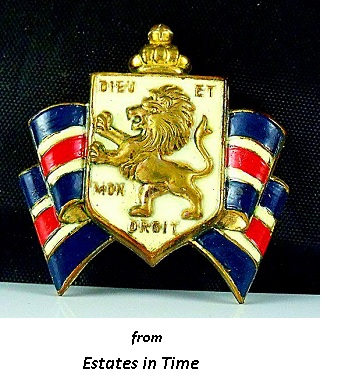 At the onset of World War II America attempted to isolate itself from the European war. Yet there was a growing desire to help fight the Axis powers.

One of the first to support the war effort was Accessocraft and designer Robert Appleby. While the founders of Accessocraft were of German descent. Edgar Rodelheimer and Theodore Steinman both opposed the invasion of Poland and the oppression of Nazi Germany.

As a result, the company would release several pins throughout the war to support the Allied forces. With the pin to the left being the first.

Patented in 1940, Accessocraft donated one half the ownership of the pin to the “British War Relief Society”. While donating the other half to “Bundles for Britain”. In response to the donation, “Bundles for Britain” also decided to use the design as the organization’s emblem.

Another firm dedicated to the war effort was Silson. Formed prior to the war by the brothers Victor and Jack Silberfeld. The plight of European Jews deeply troubled the brothers. As we can see by the sheer numbers of Patriotic designs available today.

Still another design house credited with supplying relief is Monet. While the Monet Bundles for Britain pins are harder to find each of these companies shared in their efforts to support the Allied Forces as America remained out of the war. Often advertising their jewelry with the slogan “Send Guns not Sons”. 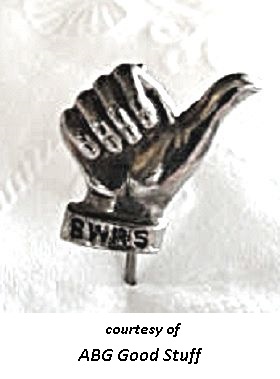 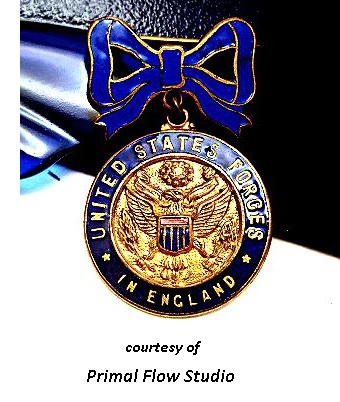 Although the idea of soldiers sending home mementos to their loved ones began even before World War I. Sweetheart jewelry such as the pin to the right became extremely popular in World War II. This pin is a gift to the wife of an Air Force serviceman during World War II.

Trifari and Coro Sweetheart pins were especially favored. The chief designer for Trifari during the war was Alfred Philippe. A Frenchman concerned over the invasion of his homeland,  Philippe created many patriotic designs throughout the era.

Due to the rationing of some metals during the war, many pieces of jewelry were made from celluloid or wood. While high-end costume jewelry is generally sterling silver.

Little went to waste during these years. In fact, the plastic of the popular Trifari jelly-belly brooch (as we know them today). Is actually from airplane windshields which did not meet standards.

Mothers, wives, and sweethearts wore these pieces of jewelry with pride. Not only were they a symbol of National reverence, but they also connected them to their loved ones serving the country. A blue star on white background with a red border indicating a son or husband in service. While a gold star became the symbol to signify death in service, Much like the battle cry “Remember the Alamo” one-century earlier. The slogan “Remember Pearl Harbor” accented with pearls became another prominent theme motivating the nation to prevail.

While everyone owned a few of these Sweetheart pins during the war, their production slowly came to an end with the close of WWII. Yet today collecting these iconic pieces of memorabilia is becoming more popular. 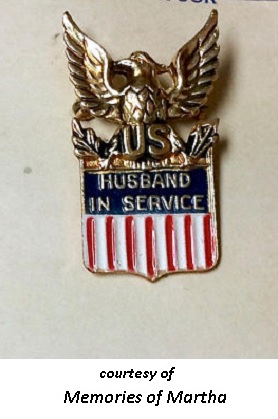 The V pin or Victory pin is an emblem that arose from a speech given by Prime Minister Winston Churchill on July 19th, 1941. With a simple hand gesture, Churchill united and inspired the Allied coalition. Giving hope to the people during the darkest days of the World War II.

It was a gesture of defiance and solidarity as Great Britain basically stood alone against the Reich. Since the Axis had at this point overran the rest of Europe and America was yet to enter the fray.

Yet it was a gesture that did have a humorous beginning. As Churchill first began raising his fingers to form the V for Victory, the gentleman instinctively turned his knuckles outward with his palm facing himself. Possibly due to his familiarity with holding a cigar.

Being from money Churchill had very little knowledge of working-class expressions. We can only imagine his shock when his staff informed him that by holding his hand in this manner he was essentially giving them the bird.

As the war progressed through the early 1940’s this symbol became a universal inspiration to the men and women of the Allied Nations. As many variations of the V for Victory pin began to appear.

The pin above is an example of what is called “Trench Art”, handmade by a soldier in World War II. While these expressions of artwork were not a phenomenon of World War II, they give a unique insight into the emotions and materials available to the fighting men of the era. 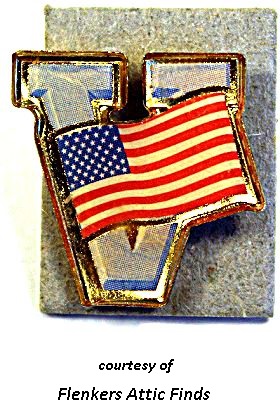 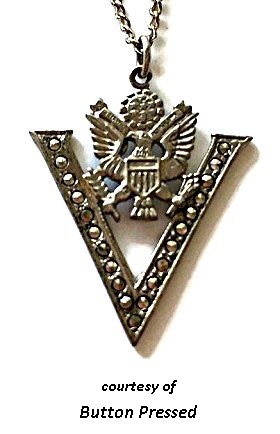 Throughout the war, design artist gave their support from Alfred Philippe to McClelland Barclay who gave his life. Not only did their creations bring a touch of glitz to the otherwise drab fashions of a nation at war. They also brought national pride and hope. Reflecting a sense of service as the men and women of the country worked together for the common goal.

2 thoughts on “Patriotic Costume Jewelry of the 1940’s, Views of a World at War”