On September 2nd, 1945 World War II officially came to a halt. While the world sighed an expression of relief, after being in turmoil for the past fifteen years. A sentiment quickly embraced by fashion trends of the 1940s Costume Jewelry industry.

While the 1930’s had brought the depression and the acceptance of costume jewelry. The early 1940’s brought the war and patriotic pride. Yet by the mid-decade large novelty pieces displaying the playfulness of a generation finally at peace were the norm.

Shaped by world events, restrictions, and shortages, the American costume jewelry business had come into its own. Thanks to the inventive designs of artist such as Miriam Haskell and Alfred Philippe. As they created works of art using plastics and wood to replace the fine crystals of eastern Europe.

Even after the close of the war, and the lifting of restrictions placed on metals the demand for plastics such as Bakelite, Catalin, and Lucite remained strong. 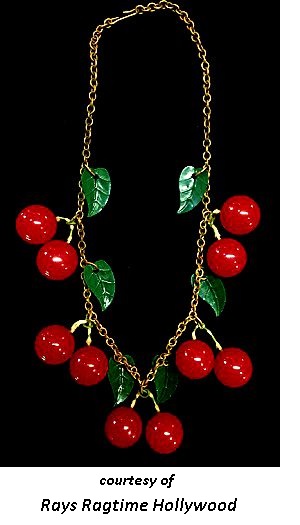 Whimsical novelties were the order of the day. As the elegant styles of the 30’s began to give way to adventurous new themes. Bold in both size and color, featuring motifs of fruit, vegetables, and floral designs. As designs turned away from the Art movements towards a Victorian Revival.

One popular arrangement repeated by numerous designers was the red cherry, as seen in the photo to the left. Popularized by singer and movie star Carmen Miranda. Yet themes of other fruits and vegetables were also seen.

Due to the sheer size of most 1940s costume jewelry designs, it became popular to only combine two pieces of jewelry at a time. To avoid appearing boorish or vulgar.

Often combining earrings with a brooch, a necklace with a hat pin, or a bracelet with a dress clip. For the well-dressed lady, anything more would just be too much. 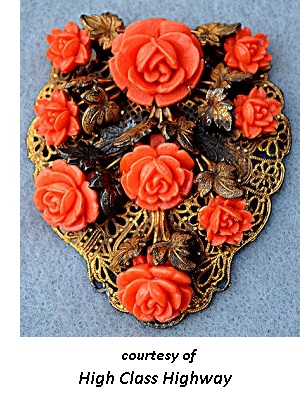 Floral patterns were also a favorite theme during this era. Where carved celluloid flowers are mingled with wood, rhinestones, or brass to create stunning designs. With many fascinating styles shaped by the designers of Trifari, Coro, and Monet to name a few of the best-known brands.

Necklaces of the era would incorporate these themes into the trendy bib necklace of the age. As worn by Doris Day in her 1948 movie “Romance on the High Seas”.

Other popular necklaces of the era included large beads or multi-strand necklaces in shorter lengths than the earlier decades. Generally rested just above the dress neckline or down to mid-chest. 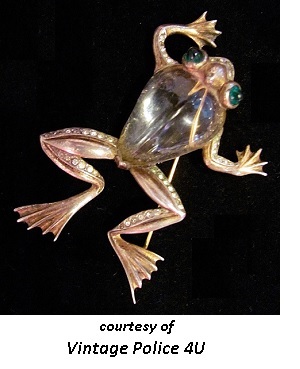 Many brooches and pins would also follow these themes. With floral designs in various materials. Including hand-sewn felt flowers often sewn at home by resourceful ladies of the 1940s.

Keeping with the nature themes prevalent during the decade. Alfred Philippe of Trifari introduced a new style of figural pins in 1940, which would come to be known as Jellybellys.

Originally produced using Sterling Silver and defective World War II-era airplane windshields, these little creatures with their clear cabochons became a tremendous hit. A design which was quickly copied by Coro and other jewelry makers, resulting in multiple court battles between them and Trifari.

Sometime later designers including Trifari would begin to use colored plastics or glass in place of the clear Lucite used originally, Although these later designs appear very similar they should not be considered Jellybellys.

As with other pieces of jewelry during the 1940s, bracelets became wide and 3 dimensional. With nature themes of flowers and birds cast into metals accented with colorful glass. Two of the most popular style of the era was the wide panel bracelet, much like the example to the right, and the charm bracelet.

Harkening back to the age of Queen Victoria. The charm bracelet’s fame and association with the Victorian Revival allowed a lady to display the events which shaped her life. To show the world her interest and to proclaim her personality. Bolstered by the trinkets of Europe brought home by returning WWII veterans.

Southwestern themes also played a part during the 1940s. As return soldiers traveled west with their families along Route 66.

Leading costume jewelry producer Coro commissioned Mexican Silversmith Hector Aguilar to produce a line of sterling silver jewelry in their name in the early 40’s. A partnership which ran from 1943 through 1950.

While other notable southwestern design houses of the decade included Bell Trading Post and Maisel’s Indian Trading Post. Who supplied a variety Native American and southwestern jewelry to gift shops along the major byways heading west.

The inexpensive wooden and plastic bangles which had been popular throughout the 20’s and 30’s, remained so in the 40’s as ladies stacked numerous colorful bangles on their arms. 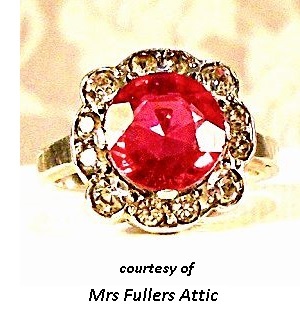 One of the growing social events of the 1940’s is the Cocktail Party. With men in their formal attire and lavishly dressed ladies. These parties are the place to be seen and a large flashy cocktail ring was a must for the special occasion.

The oversized crystal stones or semi-precious cuts giving the illusion of wealth for a fraction of the cost. These rings were more often than not simply colored glass set into gold plated rings with rhinestone accents. Yet they let a girl feel like she was a million dollar heiress to impress her friends.

Other types of rings worn during the 1940’s were the signet ring engraved with the lady’s initials or the birthstone ring. Though these rings were normally worn by a lady as everyday jewelry until she was married.

While the wedding band and engagement ring doesn’t fall under the category of costume jewelry it is worth noting that these rings tended to be fairly simple during this era. The band itself was generally a plain gold band which could possibly have an engraving of flowers or a chain of hearts. While the engagement ring normally consisted of a single round diamond or other white gemstones.

The Growth of Costume Jewelry in the 1940’s

Through all the hardships and turmoil of the early 40’s the costume jewelry industry boomed. With Trifari alone filing over 800 patients during the decade. By 1946 Providence, Rhode Island had become the US capital for costume jewelry and sales had reached an all-time high.

The effects of the depression only a decade earlier had forced many experienced jewelry craftsmen to switch from producing fine jewelry to costume jewelry causing the quality to skyrocket. As many more skilled workers fled the war-torn European blocks for the US. All leading to a high-quality product priced as cheap as 1 dollar up.