The photo above, taken by Carole Raddato is a section of “The Great Cameo of France”. Carved in the first century AD from Sardonyx. One of the three August Birthstones. The others being Peridot and Spinel. Yet the original birthstone of August is Sardonyx. While the Spinel only became an accepted birthstone in 2016.

In fact, the confusion between Spinel and Ruby only became clear in the 19 century. As we know now many famous Rubies in history are in reality Spinels. “The Black Prince Ruby”, and “The Timur Ruby” being the most famous. With records written down in Marco Polo’s diary where he speaks of Balas Rubies.

However, the Peridot has been the most popular of the August birthstones since 1912. When the National Association of Jewelers defined the list, in response to Tiffany’s ever-changing advertisements. 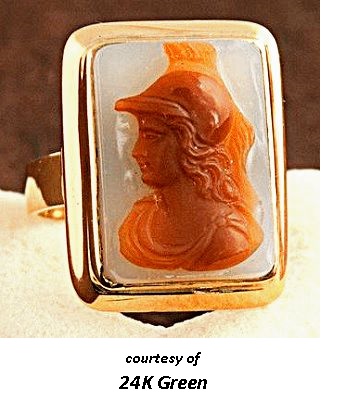 A favorite among the Ancients, the sardonyx was unlike most jewels of the day as it was worn by the rich and the commoners alike. Readily available the lower classes could easily afford the striated stone.

Yet due to the softness of the stone, Artist could produce ornate cameos worn by the upper class by 300 BC.

In “Antiquities of the Jews, Book III”, by the first-century Jewish historian Josephus, the writer describes two Sardonyx buttons at the shoulders of the ephod which held the Breastplate of Arron. The buttons engraved with the names of the sons of Jacob.

In recent years a Sardonyx jewel has surfaced which closely resembling the stones described by Josephus. Said to have been received by the Knights of the Templar and handed down through the generations.

Strangely under examination by Dr. James Strange of the University of South Florida, he states the gem has Hebrew engravings within the gem below the smooth surface of the stone. A feat no one can explain.

The Roman culture was particularly fond of the Sardonyx. As soldiers wore carved cameos of their god “Mars, The God of War” to give them courage, fearlessness, and to bring victory. While Roman officials wore Sardonyx signate rings to seal documents since the stone resisted hot wax.

By the age of the Renaissance popular beliefs claim Sardonyx bestows charm and charisma. Allowing its wearer to give eloquent speeches. Hence the gift of a Sardonyx ring given to The Earl of Essex by Queen Elizabeth.

Peridot the Most Popular August Birthstones 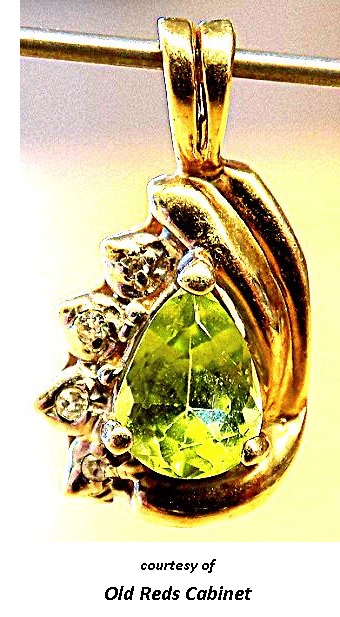 The oldest records of the jewel Peridot point to mines on the island “Topazos” or Zabargad in the Egyptian Red Sea as we know it today. Mined for over 3500 years, this makes Peridot one of the oldest gems known to man.

While the connection of the jewel to Egypt has led many historians to believe the emeralds of Cleopatra were actually peridot. Yet ancient Egyptians appear to know both gems. As there are records of mining emeralds in the mountain valley of Wadi Sikait. As well as the records of peridot mining on Topazo Island.

With Egyptians anointing Peridot the “Gem of the Sun”. Holding the gemstone in such high regard as to encrust ceremonial chalices with the jewel. While guarding the Isle of Topazo from any trespassers with a penalty of death.

Another name, the “Evening Emerald” is possibly a reflection of the unique mining techniques on Topazo Island. With miners searching the island at night. Under the moonlight, the radiance of the stone made them easily spotted. Marking their location during the night for extraction the following day.

As the green jewel began to filter out of Egypt to the world, legends of the gems powers were sure to follow.

Pliny the Elder tells in his book of “Natural History”. To dispel night terrors. Peridot is to have a gold mounting. and strung with the hair of a donkey. Then wore on the right arm to provide its strongest effects.

Yet other cultures also treasured this green jewel. A world away, ancient Känaka Maoli or Native Hawaiians believe peridot to be the hardened tears of Pele. A destructive and generous Goddess whose temper flairs with violent volcanic eruptions. While she forms new land on the islands of Hawaii. Such as the beach of Papakōlea, where peridot crystals form one of the few green sand beaches in the world. 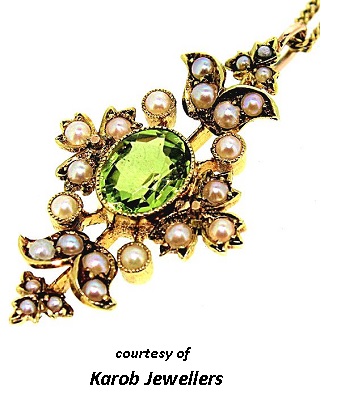 With the fall of Rome and the reign of the Dark Ages, the spread of Peridot was mostly contained to the Middle East. For centuries Europe had little knowledge of the lemon green jewel. This is until the start of the Crusades and the discovery of Topazo Island by Crusaders.

Impressed by the jewels seemingly supernatural glow in low light, As well as references to the gem within the Bible. Crusader’s returning from the Middle East brought magnificent gifts of Peridot, given to the Church. Many of the fine gems used to decorate Sacred Vessels. With a large peridot jewel of more the 200 carats decorating the Shrine of the Three Magi at the Cologne Cathedral.

Even to this day, many Catholic Bishops wear a peridot ring as a sign of purity and morality.

As the Middle Ages drew on the gemstone peridot became fairly popular among the upper classes of Europe. Although the jewel never reached the popularity of the richly colored emerald. Still, legends of stone’s powers to bring good luck, peace, and success brought an air of intrigue which noblemen and women could not resist. With many of the largest Peridot gems belonging to the royal jewels of Russia. Only to disappear during the Russian Revolution in 1917.

Amazingly some of the facts about this gemstone are out of this world. In 1749 a unique meteorite struck Russia south of Krasnoïarsk. Encrusted with the green jewel quality Peridot gems. Making Peridot one of the very few gems which have come from outer space. 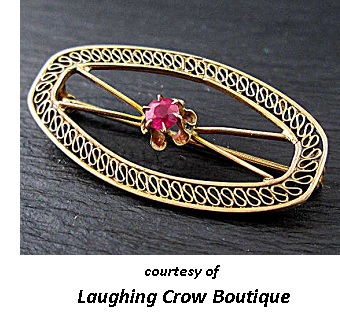 The Spinel has only been a birthstone for August since 2016. In fact, prior to the late 19th century Jewelers regularly mistook Spinels for Rubies and Sapphires. Although some did realize these jewels were special.

As mentioned above Marco Polo wrote of the balas ruby, mined in the mountains of Badashan. at Syghinan. In Marco’s accounts, the King of the region laid claims to all stones produced by the mine with orders to kill any trespassers or thieves.

Several of the most famous Rubies in history are actually Spinels including the Timur Ruby and the Black Prince Ruby. Each having a long history of warfare and bloodshed.

Often referred to as being pure history, the Timur Ruby’s earliest known records date back to the 14th century. When Timur Lenk invaded India, leaving Delhi in ruins. From there the jewel has passed through the hands of no less than six kingdoms. As Emperors fought countless battles across the Middle East to possess the gem. Thought to be the largest Ruby of the old world. Where five separate Emperor’s engraved their names into the large spinel.

A popular legend surrounds Jahangir, the Mughal Emperor of India who became the first King to inscribe the Timur Ruby. Where folklore tells of his wife’s displeasure, with a story of the scolding, she gave the Emperor. Unfazed by his unhappy wife, Jahangir is said to have replied: “This jewel will more certainly hand down my name to posterity than any written history. The House of Timur may fall, but as long as there is a King, this jewel will be his.” 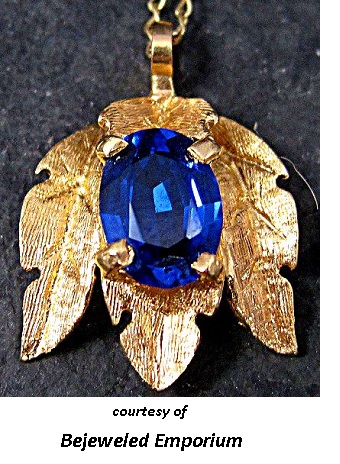 Yet the red spinel isn’t the only mistaken jewel. Attracted by the rich cobalt blue color, many of the worlds crown jewels decorated with the rare blue spinel. Originally thought to be sapphires.

Such as the large blue jewel mounted atop the Holy Roman Emperor Rudolf II Crown of Austria. Commissioned in 1602 as a personal crown for Rudolf Habsburg II.

These personal or private crowns were often commissioned by Rulers who wished to wear a crown to various events. Since the coronation is the sole purpose of the Imperial Regalia.

Generally, these private crowns were destroyed upon the death of the kings. Yet the Crown of Rudolf II is one of the few personal crowns to survive, due to the Crown’s beauty and perceived artistic design. Instead, the Habsburg family adopted the crown as “Crown of the Austrian Empire”.

Personally, the Blue Spinel is by far my favorite. Although the spinel appears in several other hues other than red and blue. With a range between the two colors to include Pink, Orange, and Violet all the way to an alluring Black Spinel. Often with dramatic inclusions which appear to be air bubbles suspended inside the jewels. Where these inclusions can create unique optical effects. Such as the star associated with a star ruby and occasionally appear to give the optical illusion of a human fingerprint.

One of only three months to have three birthstones, August joined June and December in 2016, giving Leo’s more choices. While Peridot is the 16th anniversary stone and Spinel is the 22nd.

From the amazing old world carved Sardonyx Cameos to the breathtaking cuts of a Cobalt Blue Spinel your sure to find August Birthstones just right for you.