The production of Georgian Era Jewelry spans 123 years from 1714 to 1837. During the reign of five English Monarchs, George the I, II, III, IV and King William the IV. Although the era derives its name from the English Crown. Cultural influences across Europe played integral roles in the styles and designs of this period.

One of the largest contributors to the Georgian Era turned out to be a French King, Louis XiV. Although King Louis died in 1715, by revoking the Edict of Nantes which had given civil rights to the Protestants of France in 1685. This one act initiated a massive emigration of Protestants also known as Huguenots.

Seeking asylum in Germany, Holland, and England the Huguenots were largely artisans and designers. Thereby supplying some of the best craftsmen to be found anywhere in Western Europe. Who would come to design the Georgian Jewelry in England

Jewelry from this time period was extremely labor intensive being handmade by skilled artisans. Starting by hand hammering gold and silver ingots into thin sheets. Prior to shaping the integrate reliefs seen in Georgian designs.

While the era as a whole bears the classification as Georgian. There where subtle shifts in form and preferences along the way. From the creation of French paste to the changing taste for colored jewels

As well as political influences which had their effects. It was a period which saw wars between England and France. As revolt spread across Europe, and the birth of a new nation in America. 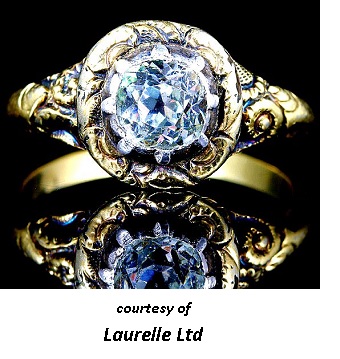 As I mentioned above the early Georgian Era Jewelry from 1714 to 1750 was the product of complete hand craftsmanship. From the thinning of metal ingots to the shaping of gems. Clear stones were the jewels of choice during this time. Even though diamonds were scarce. Well before the discovery of diamonds in South Africa.  Jewelers sought to conserve as much of a precious gem as possible when cutting.

This along with the limitations of hand cutting led to mismatched shapes and uneven facets seen in Georgian pieces. As with the majority of Georgian jewelry, gems were set into closed back settings. Often with a foil backing to reflect the dancing candlelight of evening balls.

Sadly jewelry from these early times is extremely rare. As it was a common practice during the era to meltdown styles as they faded from popularity. In order to create new popular designs.

A common form of metal work practiced during this age is “Repoussé”. Since the practice of casting as we know today had not begun. Instead, the wonderous motifs of floral, crescents and ribbons are models of reverse chisel work. Thereby creating a raised pattern visible on the front of the piece, while the thickness of the metal remains constant. 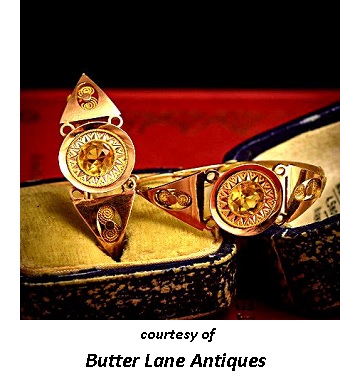 By the 1750’s things began to change with Georgian Jewelry. One notable advance around this time was the invention of the rolling press. Which streamlined jewelry production by eliminating the need to hand pound ingots into sheet metal. A job usually handled by an apprentice.

Another event which had a huge impact on Georgian jewelry during this period is the excavation of Pompeii. The ancient Roman city consumed by a volcanic eruption. Bringing motifs of Greek keys, laurel and grape leave into the Georgian designs.

While the 1750’s also saw a shift in public demand for color. Fueled by the creations of Georges Frèdèric Stauss and the flamboyant fashions in the latter half of the 18th-century.

Yet with the popularity of colored jewels such as rubies, garnets, agates, and emeralds. Also came a sort of etiquette on when to wear them. Colored jewels and paste were reserved as day wear. Along with pearls, ivory, and coral. While diamonds and quartz from the Rhine reigned supreme as evening wear.

Set into links of silver these clear jewels came to be known as “Diamond Riviere”. Due to the dancing light show, they emitted under the candlelight socials of the era. However, these beautiful pieces were notorious for staining expensive fabrics and marking the skin as the silver tarnished. Then in 1767 a jeweler, James Cox, invented a method of plating the back of these silver necklaces with gold to prevent the tarnish problem. 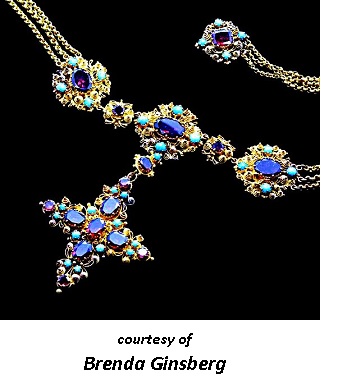 As the 18th-century neared its end Napoleon set out on his Egyptian campaign. Bringing motifs of papyrus leaves and pyramids into the public interest.

Napoleon had a tremendous effect on Georgian Era Jewelry. As his troops spread across Europe. By 1812 the Napoleon Empire stretched across Europe to the borders of Russia. With foreign monarchs forced to pay allegiance to France.

In 1813 National pride began to swell in Prussia. Which led to the creation of “Fer de Berlin” or Berlin Iron.

As the Prussian Royal Family called upon the people of Prussia to donate their gold and silver to combat Napoleon’s forces. These donations were replaced by the Royal Berlin Foundry. Reproducing the articles donated in iron with the inscription “Gold gab ich für Eisen” (I gave gold for iron). Which became vogue overnight as a symbol of patriotism and loyalty.

After Napoleon’s defeat in 1815 gold became extremely expensive, especially in France. Which helped to form a new style of gold work in Georgian Era Jewelry. While Repoussé had been the standard form of metalworking throughout the Georgian period. A new style emerged in 1820 “Cannetille”. A 3-D form of filigree which gave the illusion of large statement pieces while using much less gold. Although it is debated that the inspiration for Cannetille had its origin in either Portugal or India, the French and English brought popularity to the style.

As with anything popular and valuable you are sure to come across knockoffs and reproductions. Ultimately knowing the things to look for are imperative if you want authentic Georgian jewelry.

First of all, you need to understand Georgian jewelry is anywhere from 181 to 304 years old. It will have wear but remember wear and patina can be imitated. Also remember, Georgian jewelry was handmade, there should be tool marks as well.

Generally, gems were set into closed backs with silvered copper foil backing the stones to improve the sparkle under candlelight. To protect this foil, craftsmen would form a thin metal collet closely around the gem, often cut down to resemble prongs holding the stone. 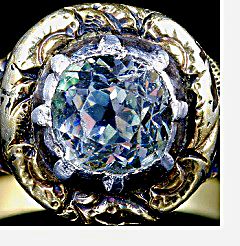 With age, it is very possible for this foil to lose some of the silver backings exposing bare copper metal. If you notice this in a piece it is quite normal for jewelry 200 plus years old.

You should notice some unevenness. Perfect symmetry is a huge red flag. As well as gaps around the collet or seeing the gems edge. While it is possible the collet could have been damaged with age, a damaged collet will look much different than a poorly formed one.

During the 17 and 1800’s cutting wheels moved much slower than today. Making this work much less precise, while producing irregular facets. Also, border designs surrounding the gem such as the picture to the left is typical in Georgian jewelry.

But be wary of white gold or platinum. As the alloy for white gold had not been discovered yet and torches were not hot enough to work platinum during the period. Also, watch for hallmarks, as this was uncommon during the era. However, it is not completely unheard of. One advantage of an assay hallmark is it can be researched. 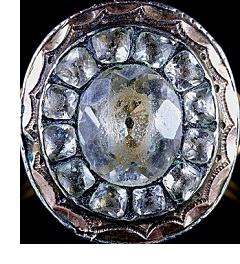 Being less expensive than true gemstones, Paste is not forged near as much, but there are some copies out there.

One of the features found in Georgian paste which is a sign of authenticity is the painted black dot. Sometimes referred to as “Black Dot Paste”. This was a labor-intensive detail artisan used to give paste jewels depth which is not seen in later jewelry. But pay close attention if you find a black dot. A popular trick used by modern knockoffs is to imitate the dot by leaving a small hole in the closed back.

A notable characteristic of paste over the gemstone is its ease in cutting. This enabled jewelers of the era to cut paste more precisely yet as you can see in the picture to the right there were still some inconsistencies.

Another tell-tell sign of true Georgian Era Jewelry is weight. During this period gold was hard to come by and very expensive. Due to this ingots were hammered or rolled extremely thin. While gold wire was often used to hand form jewelry of the day. Leading Georgian jewelry to be much lighter than a comparable piece made today.

Also, it is worth noting that it will be extremely rare to find Georgian rings in what we consider standard ring sizes today. For the most part, Georgian rings will either be very small or very large. This is due on one hand, pardon the pun, to the fact Georgian era people had much smaller fingers. Yet at the time it was quite fashionable to wear rings on the outside of a ladies glove.

All and all there are some really nice reproductions out there and if you are just searching for the look that is fine. As long as they are disclosed as reproductions or revivals. But just make sure you are getting what you pay for. These tips are by no means the full story of Georgian designs but they are a good baseline of what to look for.

2 thoughts on “In Search of Georgian Era Jewelry, Its History and How to Spot Imitations”