The evolution of jewelry from the depression and years of war into that of the 1950’s costume jewelry was a direct reflection of lifestyles and social trends during the era. America had just survived two decades of turmoil and now it was time to rebuild.

The 1950’s were full of change and prosperity. As soldiers returned from Europe in the mid-40’s ready to start their families the baby boom began. While reaching an astounding rate of a baby being born every 8 seconds by 1954. Along with an ever growing population came the migration from city life into suburbia. As communities, shopping centers, and fast food joints sprang up.

Television replaced the Radio as the most popular form of home entertainment in the 1950’s. As shows such as “The Adventures of Ozzie and Harriet”, “Father Knows Best”, and “Leave It to Beaver” portrayed the idealistic family life of the era. Where the man was expected to be the breadwinner while the wife stayed home to care for the children.

In reality, this wasn’t always true. In contrast, women had grown accustomed to earning a paycheck throughout the years of war and many refused to give up their freedoms. 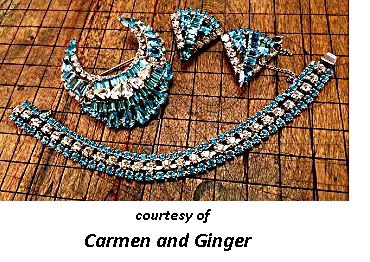 Fashions throughout the Depression and World War II had remained rather drab with plain simple cuts. Yet the 1950’s rolled in with an attention to the feminine shape. As designers followed Christian Dior’s ideals of defined waistlines and full flowing skirts. Jewelry was no longer needed as a large bold accent to bring color to the dull clothing. Instead, there was a shift to a more refined style meant to complement the changing fashions.

While designers produced matching sets or parures for a put together, coordinated look. As patriotic and novelty themes were slowly replaced by classic styles in 1950’s costume jewelry which closely resembles fine jewelry.

Another favorite of the 1950’s was Pearls. Although the pearl necklace had been a staple of the fashion industry since Coco Chanel introduced her Paris collections. In the 50’s the glamor of a short pearl strand sitting above the modest neckline took the fashion world by storm. The classic contrast of black and white making the look a must for the little black dress.

Betty Cornell wrote in her 1951 book on Teen-Age Popularity

– “‘Fads come and go, but a simple string of small pearls is still a girl’s best friend”. While fashion magazines of the day such as “Bazaar”, “Vogue”, and “Mademoiselle” inspired elegance and refinement.

Then in 1953, First Lady Mamie Eisenhower stunned the world. When she decided to wear Trifari costume jewelry to President Eisenhower’s inaugural ball. A rhinestone and faux pearl choker with a matching three-stranded bracelet and earrings. A statement to the craftsmanship and quality of American mid-century costume jewelry.

Southwestern ties to the War and 1950’s Costume Jewelry 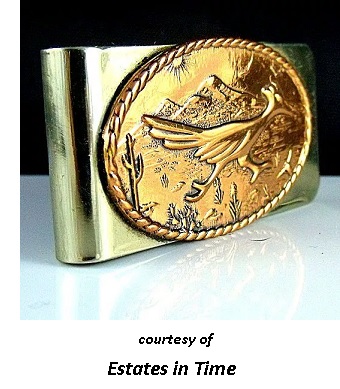 In the early 1940’s the US chose the Southwest as training grounds in preparation of World War II. Due to the climate, vast open spaces, and good logistics. Through railway service and the new highway system built during the depression to provide employment.

The Desert Training Center alone comprised of 14 Divisions with up to 20,000 men each. Not to mention multiple Airforce bases and artillery training ranges.

After the war, the Southwest grew into one of the most popular destinations for the great American road trip. As returning soldiers wanted to revisit the area with their families. Showing off wonders such as the “Painted Desert”, the “Petrified Forest”, and the “Grand Canyon”.

As Americans begin traveling by automobile for leisure for the first time in the late 40’s and throughout the 1950’s. Tourist shops and unusual roadside attractions began popping up across the Southwest. As well as a revived interest in Native American culture and jewelry from the Fred Harvey era of Railway travel. Many of these tourists attractions supplied by Bell Trading Post and Maisel’s Indian Trading Post.

While the 1940’s had been awash with bold primary colors including the patriotic Red, White, and Blue. The 1950’s shifted towards softer pastels and bold tropical colors such as pink, yellow, and lime. Although red remained a very popular color during the era,

Two other colors which seemed to be resurrected from the 1920’s were turquoise and coral. While this may have been due to the renewed interest in Native American themes nothing really points to this being a definitive reason.

Much to the turquoise in 1950’s jewelry was imitation plastic. During the early years of the decade stabilizing the stone had not been invented. So real turquoise was very susceptible to the chemicals of daily life as well as the oils of a person’s skin.

After regaining its popularity in the 1930’s yellow gold remained in vogue into the 50’s, with rose gold on the rise. Yet textured gold became more and more prominate. As designers took advantage of the style to bring interest to necklaces, brooches, and bangles. 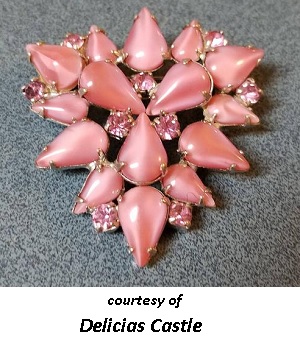 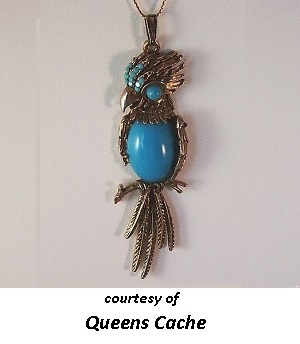 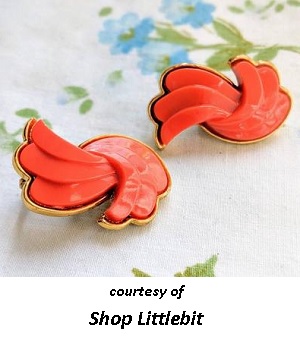 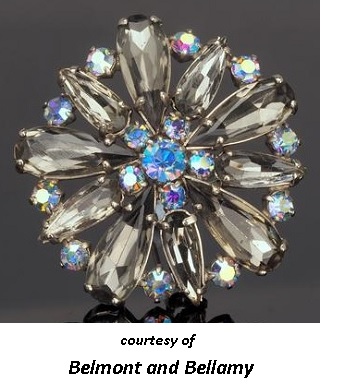 With the renewed supply of sparkling rhinestones and Czech glass after the war. Designers began adding glitz to all facets of fashions. From hats, handbags, and belts, to evening dresses themselves.

Not to be outdone, Christian Dior collaborated with Swarovski to develop a new glass stone with an iridescent sparkle. Which were released in 1956 and named Aurora Borealis. Sadly the same year the founder of Swarovski, Daniel Swarovski died at the age of 93.

The Aurora Borealis became an overnight phenomenon. Not only due to the mesmerizing flashes of color, but also due to the rhinestone’s versatility. With the ability to pick up color from the surrounding fabrics a single piece of jewelry could match an entire wardrobe.

Throughout the latter half of the 50’s into the 60’s most jewelry designers used these new rhinestones especially Trifari, Coro, and Juliana. 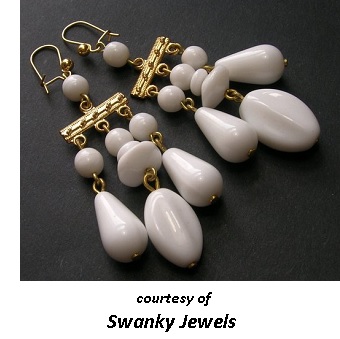 For almost 100 years pierced earrings had been seen as barbaric and a sign of loose morals. Yet in the late 1950’s these views began to change.

By far the clip on styles remained the mainstream forms of earrings, but slowly piercings became acceptable. With teenage girls throwing ear piercing parties. Where a common practice included using ice to numb each other’s earlobe then using a sewing needle to pierce the ear. Often placing a slice of potato behind the earlobe to receive the needle.

The clip earrings of the early 50’s were dominated by dangling pendant and button styles laden with sparkling rhinestones, gems, and pearls. With high-end evening and formal clips featuring glimmering diamonds.

Yet as pierced earrings began to take hold in the latter part of the decade the length of the earring started to grow. As did the complexity of the designs. With hoop earrings gaining steadily in popularity. Often worn in matching colors to the Ladies choice in headbands or hair scarf.

The one constant throughout the decade was a put together, coordinated look which proclaimed refinement. 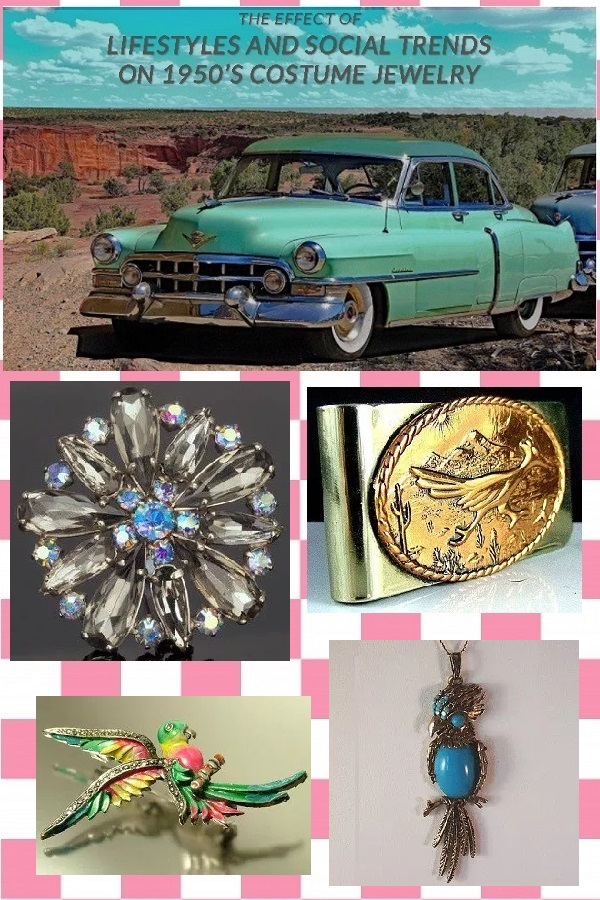