December Birthstones are a mixture of new and old with the newest discovery of Tanzania as well as the oldest stone Zircon. Yet mysteries, legends, and fables still shroud the stories behind these jewels. All bearing unique shades of Blue. The color of December since 1912.

Historically the Bloodstone and Ruby had been the gems for the month of December since the 15th-century. Then in an attempt to standardize the list of monthly jewels. The National Association of Jewelers adopted Turquoise and Lapis Lazuli as Decembers gemstones. Yet both stones were very susceptible to damage due to their softness. Which led to the replacement of Lapis Lazuli with Zircon in 1952. 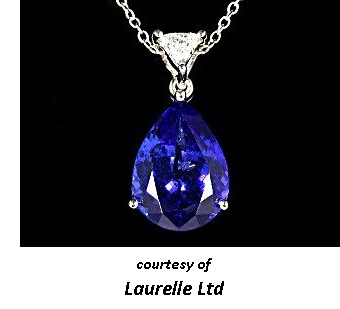 After the discovery of Tanzanite in 1967 the jewel was added as a third gemstone for December in 2002. For a jewel with the short history of fifty-one years. Tanzanite doesn’t enjoy the intrigue other gems do. Still, it too has an air of mystery in its very discovery.

Believed to have been the product of an ancient eruption. The stones lay unnoticed in the shadows of Mt Kilimanjaro for centuries.

Then by chance, a Lightning strike set a hillside in Tanzania ablaze burning with tremendous heat. After the fire subsided Maasai herders came to inspect the baren grassland on which they had previously grazed their livestock. Only to find the beautiful blue stones born from the heat of the fire.

While this fable may or may not be true. It is undisputed Tanzanite’s official discovery came in 1967 by the tailor and part-time prospector Manuel D’Souza as he searched for diamonds in the Manyara Region of Tanzania. The only place on earth the jewel is found.

Known as the oldest mineral on earth Zircon is older than the earth’s moon with fragments found in Australia thought to date back 4.383 billion years. Sometimes referred to as earth’s timescape, Zircons have been studied to learn the events happening on our planet down through time.

In ancient India, Verdic scripts speak of Zircon as the leaves of the mythical wishing tree of Kalpa. Which taken from earth by the Hindu god Indra. In the legend, people began using the tree for evil wishes and the god swept it away.

Also named in the Christian Bible as one of the stones in Aaron’s Breastplate as well as one of the twelve stones used to create the foundation for the city walls of Jerusalem.

While one of the earliest stories about the jewel dates to the 5th-century BC. Where some translations of storyteller Aesop’s fable “The Cock and the Jewel” mentions Zircon as the valuable jewel found by the cock as he searches for food. Although a valuable gem the jewel is worthless to the hungry bird as he cast it aside. 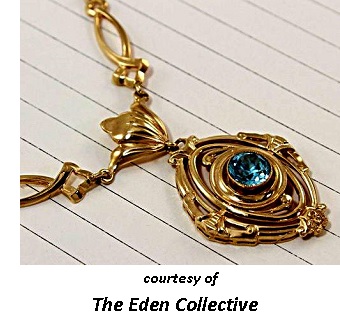 The jewel Zircon riddles ancient Greek legends. Another legend tells of a ceremony calling for each new loaf of bread to bear the mark of a cross. Then to trace the mark with the Zircon gem to ward off evil spirits. A practice which was possibly the result of people becoming ill. Suffering hallucinations after eating bread baked from molded grain.

December Birthstones in the Middle Ages, a Tale of Zircon

By the16th-century Italian jewelers were using Zircon in their creations at an increasing rate as the jewel gained popularity. Many believed the jewel brought inner peace while providing its owner wisdom honor and vast riches.

Through the 1500’s into the 19th-century popularity continued to expand reaching a climax during the Victorian age. Where in the 1880’s Tiffany’s famed gemologist George Kunz became an avid fan of the gem proposing a name change to “Starlite”. Although this name did describe the fiery nature of the jewel, Kunz’s name never took hold.

Sadly, today many mistakenly associate this wonderful jewel with the cheap, manmade Cubic Zirconia. An imitation diamond which grew in acceptance during the 1930’s. 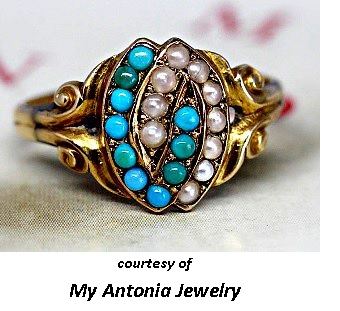 Thought to have been mined on the Sinai Peninsula as far back as 6000 BC. Turquoise represented the Goddess of joy, feminine love, and motherhood, “Hathor”. Worshiped by Egyptian Royalty and the common people alike as the mother of “Ra” the Sun God.

Being one of the oldest gems to be used for decoration in the Mid and the Far East Turquoise is also thought to be one of the twelve stones of Aarons Breastplate.

While the Tibetan culture embraced Turquoise for its serene color. Yet also viewed the gradual shift in color from blue to green into black as worn over time as the growth of wisdom. As the jewel absorbed the sins of the owner. A belief which is central to the Buddist religion through the cycle of life and death.

Turquoise the December Birthstones of the Mediterranean 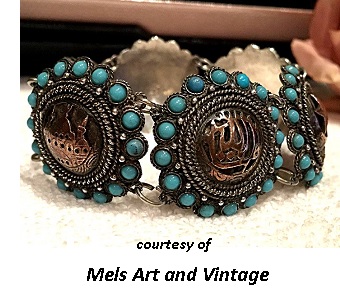 While the Mediterranean civilizations of Greece, Turkey, and Persia are best known for the use of the jewel. Viewed to have the protection of heaven in the Persian culture Turquoise appears in every aspect of the Persian lifestyle. From decorating Temples and Shrines to accessorizing Persian fashions. As well as encrusting the hilts of daggers and swords.

Viewed in Greece as the jewel of purity the gem was often presented to young maidens as they came of age. Which reveals the use of Turquoise on the Virgin’s Crown in the 15th -century tale “Visions of Ste. Francoise”.

Yet Turkey would give the ancient stone its modern name. Brought to Europe during the 13th-century along the Sik Road by Turkish traders, the name Turquoise comes from the French phrase “Pierre tourques” or Turkish Stone.

Throughout the centuries from the 13th until the 19th Turquoise popularity in Europe waxed and waned. Becoming prominent during the Victorian era, especially so during the Romantic period.

Native America and the December Birthstones 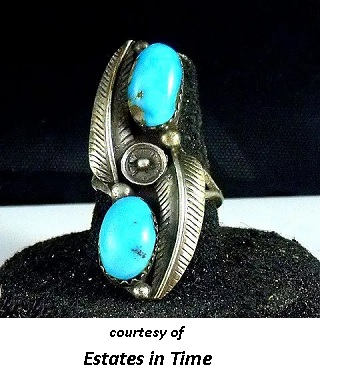 Known as the “Sky Stone” in Native American cultures, a legend is told of the jewels creation. The legend says that a great dance and celebration occurred to rejoice the coming of rain to the Southwestern desert. As they cried tears of joy, the Native’s tears mixed with the rain and seeped into Mother Earth to become the Skystone, Turquoise.

Believed to be a protector, there is a saying “the stone took it”. In other words, if you should be wearing Turquoise and notice a crack in the gem. Native American’s are saying the stone took a blow that was meant to hit you.

Thought to have first been mined in the Americas around 900 AD by the Aztecs. Each of the South American and Mesoamerican tribes In had a fondness for the stone. Called “Chalchihuitl” by the Aztec, the gem was said to be tears of the Sky Goddess turned to stone.

While the Southwestern tribes of North America, the
Navajo, Apache, Hopi, and the Pueblo each have their own fables incircling the Skystone.  The Zuni consider blue Turquoise male, representing the sky and green to be female, symbolizing earth. While the Hopi belief states that the earth freed itself from the world oceans only by the help of Turquoise. And the Apache believed that Turquoise sits at the end of a rainbow after a thunderstorm.

The Three Shades of Blue for December Birthstones

Whether you are drawn to the deep violet-blue of Tanzanite, the distinctive fire of a blue Zircon, or the sky -blue of Turquoise, vintage and antique jewelry from another era will set you apart from the cookie cutter jewelry marketed today. While you standout with a flair to call your own. 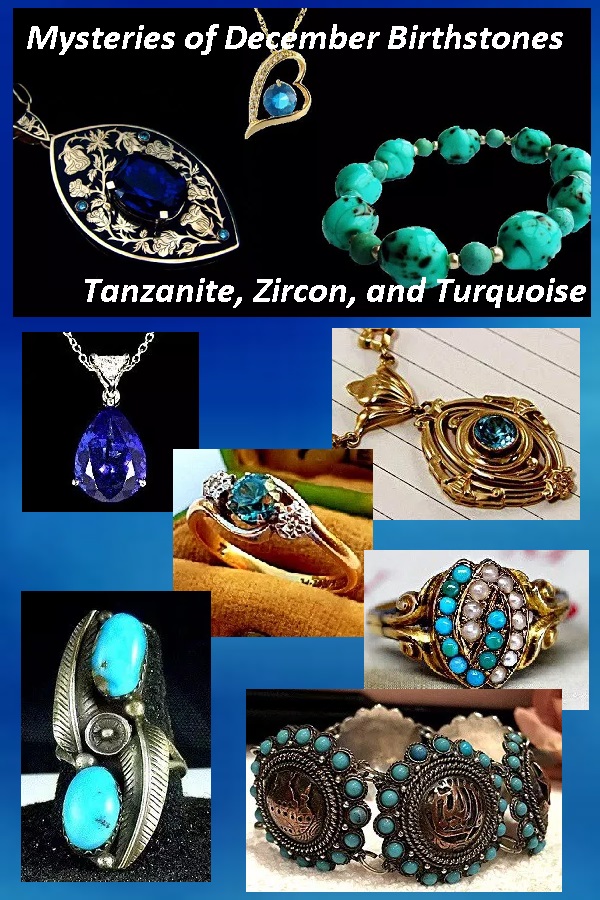 2 thoughts on “Mysteries of December Birthstones Tanzanite, Zircon, and Turquoise”