As the Georgian era came to a close, England was in the midst of political and social change. Along with a strong religious drive for high moral standards. While the start of the Victorian Age came with Queen Victoria’s rise to power at the young age of 18 in 1837. The era brought an increased global imperialization, with a turn from rationalist ideals to the romantic and mystic. In turn, reflecting these changing ideas on the styles and gemstones of Victorian Jewelry.

History speaks of Queen Victoria wearing her heart on her sleeves. Her jewelry and fashions reflecting her mood. Consequently, the motifs she chose to wear trickling down into the middle classes. Undoubtedly becoming one of the first instances of widespread Royal Trendsetters.

Divided into three sub-periods, Victorian Jewelry became increasingly affordable to the rising middle-classes. While the industrialization of the times shifted hand-made jewelry to mass-produced machine-made accessories. It was a time of intense change which began with horse-drawn carriages and candle-light. Only to end with the motor powered automobiles and electric lighting. 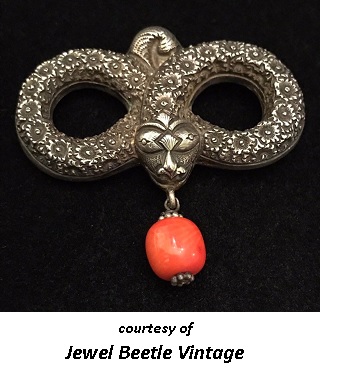 Jewelry throughout the reign of Queen Victoria is filled with symbolism. Subsequently, the early years of the young Queen is a celebration of young love. Which in later years became the Romantic Period.

Although Queen Victoria remained content enjoying her power and the late-night royal balls of her youth. Her uncle King Leopold of Belgium pressed the young Queen towards marriage until she finally gave in and agreed to meet Prince Albert in 1840.

Then as she stood atop the stairs of Windsor Castle to greet her suiter. She became infatuated at first sight proposing they marry within a week.

As a symbol of eternal love, Prince Albert presented Victoria a serpent ring with emerald eyes, her birthstone. The snake holding its tail in its mouth forming an unbroken circle.

While gold remained scarce during the early years, British control of trade with India through the East India Company brought an abundance gemstones to the English market. As jewels became a way to convey secret messages between lovers. Much like the Acrostic rings of the day. Set with a Diamond, Emeralds Amyphist, Ruby, Sapphire, and Topaz  to spell “Dearest”

Up until the Gold Rush of 1849, gold was in extremely short supply. Due to this, low karat weight and plated gold are predominate in early Victorian Jewelry. While using the Cannetille style of fine gold wire decorating. A holdover from the Georgian era, as well as Pinchbeck.

Another jewelry style to grow in popularity during this era is the Cameo. Rarely seen outside of Italy prior to the 1830s, the fine carvings became a popular gift to bring back from Grand Tours. Enchanted by the designs Queen Victoria furthered the popularity by commissioning Cameo charms which she gave as New Years presents to friends and family.

The Mourning Period of Victorian Jewelry 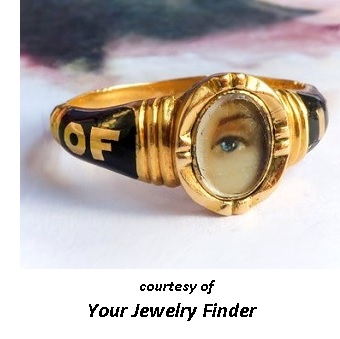 Also known as the “Grand Period”, on December 14th,1861 Queen Victoria’s world turned upside down. When her beloved Prince Albert died suddenly. Sadly Victoria would remain in mourning for the rest of her life.

Although mourning jewelry had first came popular during the Georgian era. Victorian mourning jewelry took on a more romantic theme. With braided hair or photos of the deceased. Often inscribed with “In Memory Of” sentiments.

Other themes were based on the influences and events of this period. The creation of the Suez Canel plus excavation of the Great Sphinx in Egypt during the ’60s sparked an interest in Egyptian history. As a wave of revival jewelry swept over the world.

By the time of the Exposition Universelle in 1867 which housed many Egyptian artifacts and references to the Canel, Jewelers were creating an array Egypt motifs. From Winged Scarbs to Falcons decorated in green, Red, and blue enamels.

Yet other excavations also led to revival themes. The renewed digging in Pompa and archeology finds Italy gave rise to Roman and Etruscan styles. While Doña María Eugenia the wife and Empress Consort of Napoleon III started a craze for 18th-century designs and emeralds.Where in France emeralds became the rage, more popular than diamonds.

Still, the two discoveries which had the biggest impact on Victorian Jewelry were the diamonds of South Africa and silver in Nevada. Both of which would play increasing roles during the third period of the Victorian era. 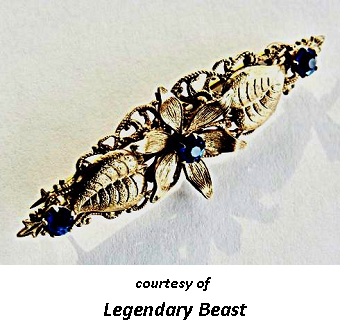 After years of self-imposed isolation, the public admiration of the monarchy began to wain. As scandalous rumors spread between the Queen and her man-servant Mr. Brown.

Yet as the 1880s approached a series of assassination attempts boosted the Queen’s approval rating. Leading to the late Victorian era. The world, as well as Victoria herself, began to look towards the future and the Aesthetic period began.

While earlier decades had been influenced by modern machinery, the late period returned to an appreciation of craftsmanship and hand-made. With the focus on pure artistic endeavors as the Arts and Craft movement commenced.

Jewelry of the period took on a dainty appearance and tended to be worn more as evening attire. With less and less focus on colored jewels. The opening of South Africain diamond mines made the sparkling gems abundant for the first time in history. While the discovery of silver in Nevada supplied a source of white metal to accent the firey jewels.

In general, the public still looked towards Royalty as trendsetters. Yet this time it would be the Queen’s daughter-in-law, Alexandra who set the style. Wearing a dog-collar style necklace with multiple strands of pearls to hide a scar. This look quickly caught on to become the vogue style during the Aesthetic period.

Also, the Acrostic “Dearest” or “Regard” rings of the Romantic period were replaced by Mizpah jewelry. A Hebrew saying which translates to  “the Lord watches over me”. Often inscribed on heart pendants, rings, or artistic designs. To be given as a symbol of close bonds.

For the most part, Victorian jewelry of the period reflected the changing lifestyles of women during this age. As they became more active in the workforce and fought for their independence.

Through the meaningful motifs of Victorian Jewelry, the artist of yesterday used symbolism to express romantic ideas. From the crescent moon worn on the honeymoon to reflect change or the star as a symbol of guiding light. The era was filled with mysticism and wonder.

The ideals of Faith, Hope, and Charity encompassed in designs of an anchor with a cross and heart. Or the French “Saint Esprit” or Holy Spirit dove descending from heaven with wings spread to symbolize faith and love.

While the Dragonfly represents new beginnings and the horseshoe is said to bring good fortunes and luck. All symbols we still recognize today. It is no wonder Victorian jewelry is some of the most cherished and prized collectibles. Bringing its owner a sense of pride and joy. 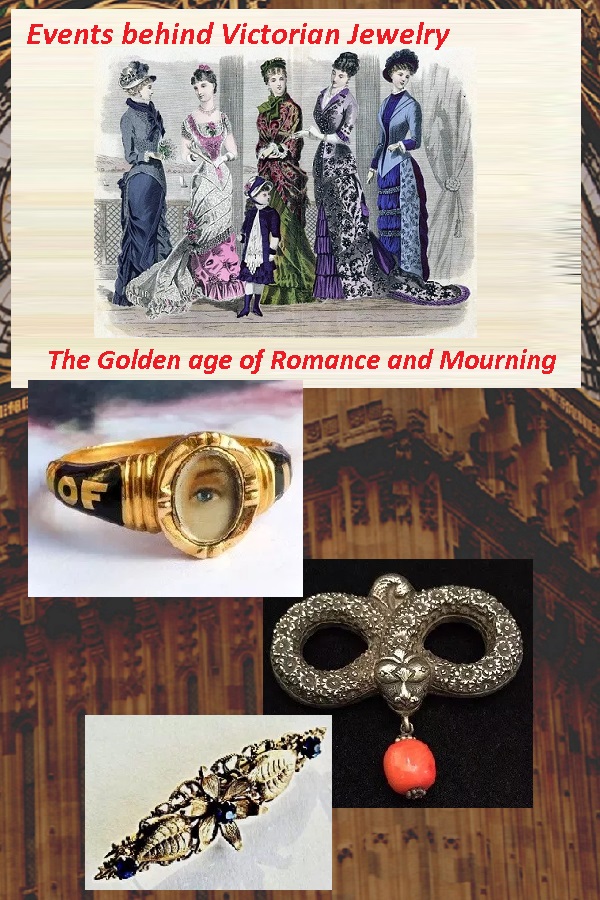