Many of the Garnet Legends down through history tell of a relationship between the gem and the fruit pomegranate. So much so the gemstone’s name comes from the Latin word “granatum“. Which means many seeds while also describing the fruit seeds of a pomegranate. Dating back as far as the Bronze Age between 3000 and 2001 BC, the garnet is one of the most readily available gemstones on earth. Yet it is also one of the rarest as well. Best known as a deep red jewel the garnet is also found in orange, yellow, and green. Although the mandarin orange and clear green is the rarest as well as the most expensive, reaching prices over $2000 per carat in some instances. While the Garnet is the birthstone of January it is also the traditional gemstone for the 19th anniversary. Although this tradition has given away to the aquamarine in modern days. Still, the Garnet is the choice for the 2nd and 6th anniversaries. 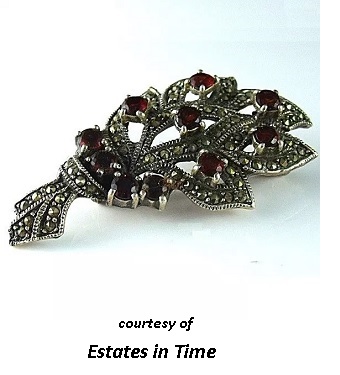 From legends of Noah using a glowing Garnet to light the Ark during the great flood. To the Muslim belief that the Garnet illuminates the Fourth Heaven. The Garnet has held a position reverence in religions since ancient times. With some claiming the Garnet to be one of King Solomon’s four precious stones. Hindu beliefs relate the Vedic legend of Vala which tells that the demons fingernails fell as garnets into the lotus ponds of Sri Lanka, India, and Burma. While Christian beliefs consider the garnet a symbol of Christ’s sacrifice. While Buddhist use garnet Mala prayer beads to repel negative energy. The Pharaohs of Egypt wore Garnet necklaces for the gem’s mystical powers. Believing the stone could bring peace, prosperity and good health. Whereas the ancient Greek saw the jewel as a gift of love symbolizing the pomegranate. Or more so, a gift which ensures the quick return of a lover. A tradition born from Greek mythology. In the fable of Persephone. Said to be the beautiful daughter of Zeus and Demeter. One day as the maiden picked flowers along a stream the god of the underworld Hades saw her and instantly fell in love. Determined to make the maiden his wife Hades swept Persephone away taking her to the underworld. Yet Zeus demanded her release. Knowing he could not refuse Zeus, Hades fed the maiden a pomegranate seed knowing she could not resists the sweet fruit and return to him. Which is how the ancient Greek explain the barren months of winter as Persephone returns to Hades each year for four months. 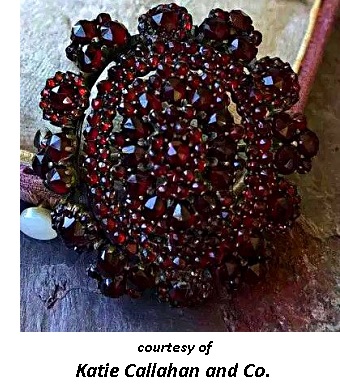 One of the oldest locations of garnet mining in Europe is the present-day Czech Republic. Where mining has continued since the Bronze Age. Widely traded in Rome, Pliny the Elder referred to the gem as the fire-stone from the city of Alabanda, located in present-day Turkey. Due to the stones dark color resembling coal, yet with flashes of red. While a garnet ring is used as a symbol of the 7th grade of holiness in the ancient Roman religion “Mithraism“. Often worn as a signate ring engraved with a seal. Even after the fall of Rome popularity of garnets continued to grow. The stone’s long affinity to the warrior class leading the Germanic barbarians who replaced Rome to trade for the gems. Decorating their Swords, Buckles, and Brooches as those seen in the Sutton Hoo Hoard. The discovery of large deposits in Bohemia led designers to again the associate of gemstone with pomegranate. With the designs of antique Bohemian jewelry. using the small Czech Garnets to set the jewels closely together to resemble the fruit itself.

Garnet Legends into the Middle Ages and Beyond 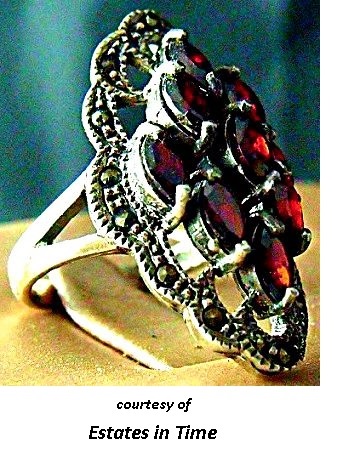 Just like the Germanic tribes of the Dark Ages both the European Crusaders and Muslim warriors believed in the protections of the Garnet jewel. Decorating their weapons and attire with the gem. Also considered a protector from poisoning during these times it was customary to drop a Garnet gem into chalices of wine. While a popular folklore of the period claims that if your dreams include losing a garnet necklace, unexpected good fortune is in your future. A popular stone of nobility and the clergy alike. With Mary Queen of Scots being especially fond of Garnets and the stones uses in holy relics of the age; Earning the designation of “the gem of faith”. With fashionable lore claiming if a person does well while wearing a Garnet, good fortune will be their repayment. Yet if evil is perpetrated while wearing the jewel, misfortune is sure to follow. A stone whose popularity has never waned throughout history. The garnet became a prominent gem used in the mourning jewelry of the Victorian Era. Symbolizing the desire to regain a broken love even after death. While the jewel has been treasured as a symbol of friendship, a protector, and healing gem down through history there is a dark side in some beliefs as well. For centuries the Burusho people of Northern India and modern-day Pakistan used garnets in their sling bows. Believing the blood-red stones would seek the heart of their prey. Then during the battle for freedom from British rule, the Hunzas tribes used Garnet bullets. Believing the garnet to be deadlier than lead. 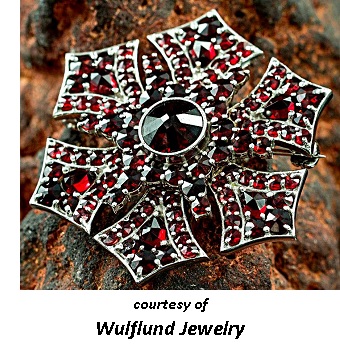 As one of the few gemstones which are not treated to improve color or clarity, as well as one of the most abundant semi-precious stones on earth. The garnet is still as popular today as it has always been. With beautiful modern Czech designs carrying on the ageless traditions of the antique jewelry styles, the region is known for. While  Native Americans still gather Ant Hill Garnets brought to the surface by Ant Colonies. Much like their ancestors have for centuries in the Southwest. With legends of Native American tribes also using the Blood Stone as bullets similar to the Burusho people. It always amazes me when cultures which have no contact come to the same beliefs. That all said the Garnet remains a stone with deep meanings from the birthstone of January, to the anniversary gem for two different dates. As well as the moody stone preferred by today’s gothic sub-culture and a stone of metaphysical healing practices. 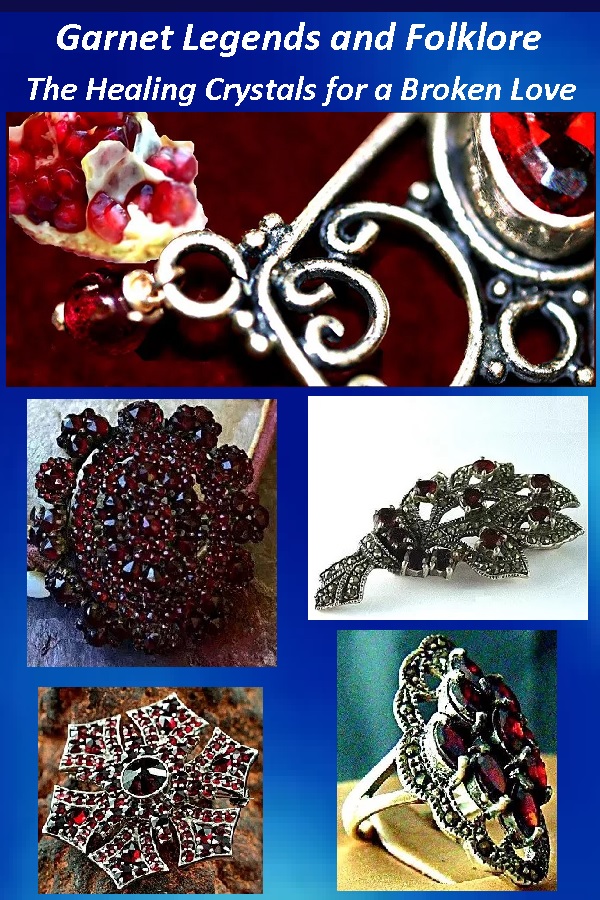