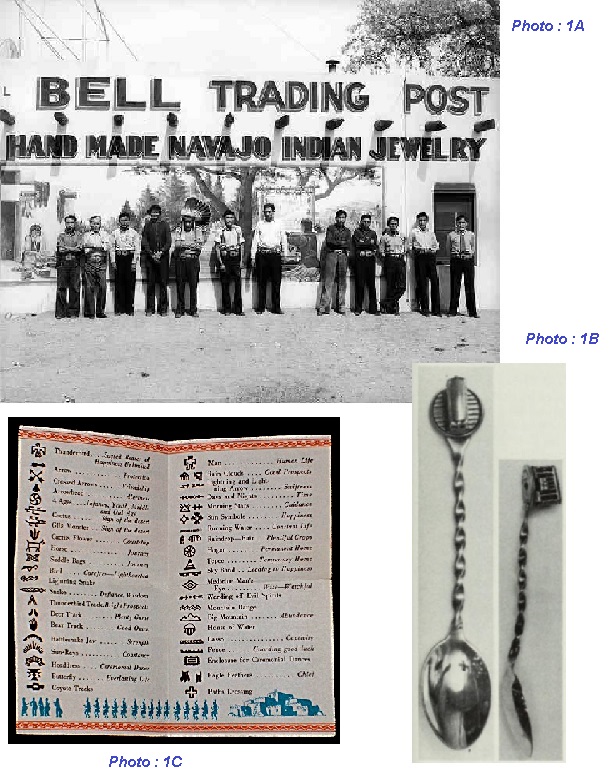 In 1932 during the worst of the Great Depression, Jack Michelson and his wife formed Bell Trading Post. Choosing a location along the route of the newly established highway “Route 66”. Following the business plan of famed entrepreneur Fred Harvey, Jack hoped to support his family selling Native American jewelry to travelers passing through Albuquerque New Mexico.

The early 1930’s were extremely difficult and jobs were in short supply. While this provided Jack with an abundance of Native Americans wishing to make his jewelry. Business was still very poor for the new upstart. Forcing Jack to use any cost cutting advantage he could find.

Decades earlier Fred Harvey had realized the Navajo taste in jewelry differed from that of travelers from the East. While traditional Native Americans wore heavy Sterling Silver with large Turquoise stones. The tourist leaned more towards lighter jewelry with smaller settings.1 Due to this reason Harvey had incorporated specialized machinery to mass produce jewelry which catered to the tourist of the day.

By 1935 Bell Trading Post followed suit installing his own machinery which was used by his Native American workers. In addition Jack began creating jewelry from Copper and Nickel Silver to cut cost as well. During these early years Bell Trading Post marked their jewelry with an image of a bell. While using various labels such as “Bell Jewelry”, “Nickel Silver”, “Solid Copper”, and “Sterling”. Even though Bell used these different marks Jack decided not to file the Trademarks during the decade to save the cost. For the most part during the 1930’s Bell had little competition in Albuquerque and Jack didn’t feel the need.

Throughout the 1930’s Bell Trading Post survived thanks to his location on Route 66. Roosevelt’s New Deal brought the CCC, while Truckers used the road for transport.

In 1939 the Great Depression loosened its grip on the nation, yet it also brought competition to Albuquerque. Only a few blocks away Maurice Maisel completed Maisel’s Indian Trading Post in 1939.2 The building elaborately designed in Pueblo architecture. An event which made the two men fierce competitors for the rest of both men’s lives.

During 1940 America was preparing for war.and the US government chose the Southwest as its training grounds. The US spent 230 million on new military bases in Arizona alone.3 Due to the remote arid landscape. As a result the area was teaming with young soldiers away from home for the fist time. Often wishing to send gifts back to loved ones.

This was the beginning of a boom time for Bell Trading Post. Over the next two decades Bell Trading Post would expand production into Collectible Sterling Spoons such as the “San Francisco Cable Car Spoon” shown above in Photo : 1B. While selling their products wholesale to various tourist shops across the Southwest.

After the war many of the soldiers who had trained in the Southwest returned, this time with their families. While some came back to stay, others traveled to show their loved ones the sights they had seen before. Nat King Cole released the song “(Get your kicks on} Route 66” in 1946 and the tourism industry was born.

While not a tourist destination, Albuquerque was a growing town in the middle of the state. With ample lodging, restaurants, and repair shops. The three most important elements for the traveling family..During these years, the late 40’s through the 50’s Bell Trading Post did well. Then in 1957 Jack Michelson pasted away4 leaving the company to his two sons, Jack and Douglas. 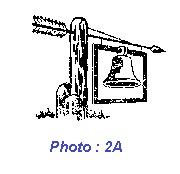 On October 7th 1960 the American television series “Route 66” premiered. Building upon earlier excitement, tourism to the Southwest showed no signs of decline. Yet the construction of Interstate 40 had begun with a path bypassing the Bell Trading Post Store.

Wishing to secure the future and company growth the Michelson brothers reinvested heavily. Not taking any dividends from company stocks through the 60’s into the 70’s.5 Focusing on their wholesale business to main tourist attractions around the Southwest.

One of the first actions by the brothers was to file the first company trademark. In 1962 a trademark was filed for Bell Trading Post as shown in Photo : 2A.6 Competition with Maisel’s Indian Trading Post continued on through the most of the 1960’s until the passing of Maurice Maisel in 1968.7 Which Resulted in the Trading Post’s closure.

By 1969 the Michelson brothers felt they needed to expand their product line. Entering into a partnership with a third-party Sunbell was formed as a Foreign Corporation in California on January 8th, 1969.8